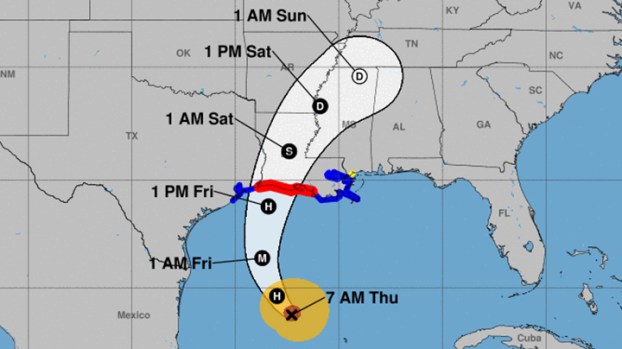 Image by National Weather Service / Hurricane Delta will strengthen as it heads toward the Louisiana coast, the National Hurricane Center says. The storm is expected to make landfall on Friday.

Brookhaven declares state of emergency ahead of Hurricane Delta

The Brookhaven Board of Aldermen declared a state of emergency for the city Tuesday night in anticipation of negative impact from Hurricane Delta.

Hurricane Delta was expected to strike the Louisiana coast by 7 p.m. Friday and advance northeastward, with the center of the storm passing west of Lincoln County in the early morning hours of Saturday.

“I don’t normally come before y’all to tell you I’m concerned,” said Lincoln County Emergency Management Director Clifford Galey, “but I am about this one.”

The local proclamation of a state of emergency allows the city to access disaster relief funding in the event of damage in the city.

Galey said all warning sirens in the area are fully functional, but will be sounded only for tornado warnings within the county. A watch is issued when a tornado may occur. A warning indicates a tornado has been sighted or has appeared on radar.

Hurricanes are capable of producing large amounts of rainfall and sever flooding, as well as tornados.

At the time of the meeting, the city was expected to receive 4-8 inches of rain in 24 hours, which would likely cause flooding. Alderman Jason Snider, Ward 4, asked Lewis and Galey if any work needed to be done to ditches or culverts to allow for better drainage.

“Nothing can be done to prevent flooding,” Galey said. If the rivers get the rain, they will overflow and the area will have some flooding no matter what, he said.

Public Works Director Keith Lewis said two bids had been received for upkeep to the city’s flower beds and sign areas — one from Signs Landscaping at $40,000 and one from LawnTech Landscaping at $13,104. The board awarded the three-year contract to LawnTech.

City attorney Joe Fernald presented three items to the board via phone conference call, all of which the board approved. The city will transfer Mills Street to Haven Hall Healthcare Center in exchange for a piece of property off Rogers Circle. Mills Street bisects the Haven Hall property and is used primarily for that business. The city will build a cul de sac road for the one home that currently uses Mills Street for access.

The board approved an exception to the Planning Commission’s zoning of a portion of North First Street. The area is zoned for industrial, but a family has had a home there for 29 years, and wishes to make Americans with Disabilities Act improvements to accommodate two residents of the home. The improvements are not allowed in an industrial zone, but are permitted in a residential area.

A request to make a portion of Roland Drive private was also approved. All homes on the street are owned by one family, who wish to close the street with a gate to prevent the continuation of illegal trash dumping.

The board approved the following hirings, pending drug tests and physicals:

• Joe Lockett in Water Department as CDL driver at $11.11/hour

The board approved the following resignations and termination:

In other matters, the board:

• Approved an increase in salary for Brenda Smith, Human Resource Director in the City Clerk’s office, from $19.61 to $20.61/hour, a 20-year length of service increase.

• Revised $500 to the BPD supply budget for reimbursement of ankle bracelet batteries.

• Revised $3,375.99 to the BPD equipment budget from Department of Justice grant funds for reimbursement of bullet resistant vests.

• Revised $300 to the BFD equipment budget from Lions Club donation.

• Approved proposed locations of Rotary Club’s donations of six metal benches — one in front of Serios Pizza/Jack’s Coffee & Cream; two next to Chamber parking lot; two in front of Inn on Whitworth; one on Cherokee Street near Whitworth at First Bank entrance.

A Brookhaven native and four other Jones College sophomores were recently selected as Tullos Scholars, the highest honor bestowed upon... read more