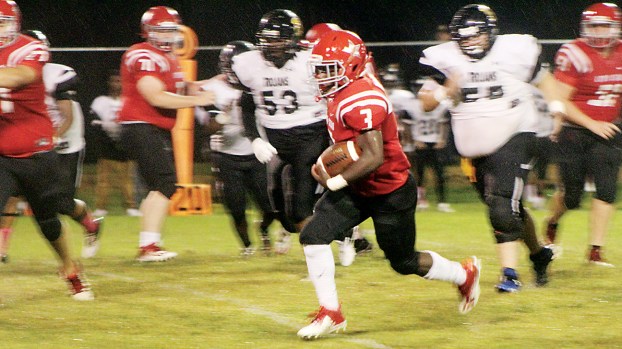 In a game that was moved up from Friday to a Thursday start in order to miss severe weather — yet that was still played in a driving rain — it was a trio of turnovers for Loyd Star that proved to be the difference in a 34-22 loss to Amite County.

The game featured zero punts as both teams used their ground game to move the ball up and down W.E. “Sambo” Smith Field.

The teams swapped scores on the first four possessions of the first half before back-to-back fumbles gave Amite County the advantage that changed the game.

Senior running back Eric Birch punched in the 2-point conversion and with 7:27 remaining in the first quarter LS led 8-0.

The Trojans get things done offensively behind their junior quarterback Kobe Johnson.

Johnson lines up behind a massive offensive line and on the first drive he ran right behind the big guys for both a touchdown and a conversion.

Fact is that if you’re around 250-pounds — then you’re the small man in the Trojan trenches.

Loyd Star head coach Brian Ford saw his team quickly respond as Birch ripped off a 51-yard touchdown run that earned loud cheers from the dedicated fans who sat under umbrellas on the home sideline.

Wilson pounded in the 2-point conversion to give LS a 16-8 advantage with 110 seconds left in the first quarter.

And like a tennis player returning a volley, Amite County again answered the Hornet score.

Jackson squirted through traffic and outran the defense for a 41-yard score on the second play of the second quarter.

Ford and his staff had a good game plan coming into the game.

Sophomore offensive lineman Lezeric Brothern moved into a fullback role for the game. Brothern would often line up beside another lineman turned backfield blocker in junior Bishop Kennedy.

Wilson and Birch ran behind all those big bodies and had nothing but success for most of the night.

Ford gave most of his offensive lineman a rest early in the game and kept them from pulling double duty by playing a different unit defensively.

The plan was to funnel ball carriers the defensive backs and linebackers like Wilson, Bryce Ford, J.T. Smith and Colby Carwyle.

With the game tied 16-16, AC got their first big break when Loyd Star fumbled on the Trojan 25-yard line.

Amite County drove down and took the lead on a 3-yard TD run by Murphy Sanders. The conversation was stopped, and AC led 22-16.

Things went from bad to worse when LS kick returner Austin Henderson was stripped of the ball by Amite County kicker Nick Stewart at midfield on the ensuing play.

Neither team passed the ball much all night, but the Trojans made the most of their few attempts to go-ahead by two scores.

Johnson found 6-foot-1, 180-pound senior receiver La’Trevion Hart on a quick slant pass. Hart beat his defender for inside position and then outran everyone for a 41-yard score.

The Hornets attempted an onside kick to start the second half, but Amite County recovered and then got another Johnson QB keeper for a score.

Loyd Star didn’t quit, though, as its lone score of the second half came on a drive that covered 94-yards.

Wilson found paydirt from 3-yards out to pull LS within two scores.

With five minutes remaining in the game, the Hornets got their first defensive stop of the night when they made AC turn the ball over on downs.

A third and final fumble ended the last Loyd Star drive of the night with one-minute remaining as AC went into the victory formation to preserve the win.

Loyd Star is back on the road next week when they travel to face West Lincoln.

The defending MAIS 4A state champion Riverfield Academy Raiders used 507 yards of total offense to pace them to a... read more