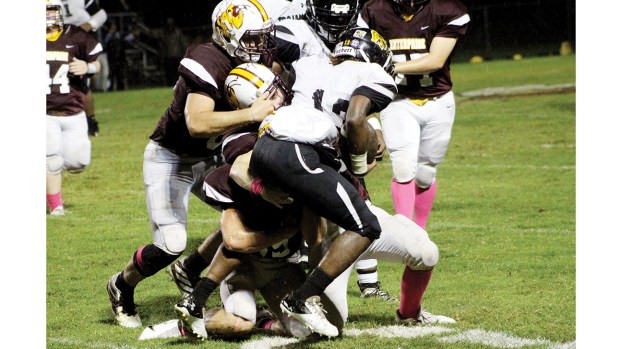 Photo by Cliff Furr Enterprise defenders swarm to an Amite County ball carrier Friday night on Harry Cole Field. The Yellow Jackets tackling as a team was a key for EAC in their 34-14 win.

Friday night on Harry Cole Field, the Enterprise Yellow Jackets looked like the Greek army at the sack of ancient Troy.

Their vanquished foe was the visiting Amite County Trojans who were on the wrong end of a 34-14 final score.

Just like the Greeks and Trojans written about by the Roman poet Virgil, what happened between the Yellow Jackets and Amite County was historical.

The win was the first ever for Enterprise over Amite County. In the past the pairing had been one sided as Amite County has rarely lost to teams from Lincoln County since joining Region 7-2A eight seasons ago.

None of that mattered Friday night though as Enterprise owned the game from the start — well, almost the start.

On their first play from scrimmage the Trojans raced down to inside the EAC 10-yard line as they looked poised to put quick points on the board.

With their backs to Hwy. 583, the Jacket defense stiffened and forced a fumble to take over possession on third and goal. The game was played in a steady rain and was delayed 30 minutes by lightning at the start.

EAC wasted no time in setting the tone as quarterback Lawson Chemin took a keeper 75-yards up the middle and ran past every Trojan on the field for the score. The conversion pass went to Edrick McCray to put the Jackets up 8-0.

The Enterprise defense fed off that long run as they began to eat up the Trojan offensive line. Senior Michael Kees shot through for a sack that put AC behind the chains. Brayden Polk then knocked down a pass and on third down Chris Walker and Trevor Green dog piled on the Trojan quarterback at the line of scrimmage.

The ensuing punt snapped sailed over the head of its intended target and Enterprise recovered at the Amite 21-yard line.

Chemin splits time at QB with junior Matthew Burns as coach Trey Woodard mixes the two in throughout the game.

On 4th-and-inches at the 11-yard line, Chemin dove ahead to pick up a new set of downs. Burns then came in, sold a handoff to Jordan Stephens and then pulled the ball back to himself as he raced 10-yards around the left end for the score.

On the conversion, Burns rolled out and found Tre Baker in the back of the end zone to put EAC up 16-0 with 3:53 in the first quarter.

The next time Enterprise touched the ball, they got nearly the same exact results. It was Burns running the read-option again on a 4th-down play as he rushed around the right end of his senior-laden offensive line to score the third EAC rushing TD of the first half.

As good as everything had gone in the first 23 minutes of action, Amite County nearly got on the board late in the first half and the stand that EAC made to keep them out doused much of the fight that AC had left in them.

The Trojans were on the 3-yard line with 15 seconds left. A reverse was sniffed out by Stephens and a host of other Jackets as AC was then forced to pass on the next two plays — passes that were batted down by Enterprise.

Amite County got a pair of scores in the second half, but the Jackets also had two more rushing touchdowns in the final two quarters — one more from Burns and another from McCray.

“I told them at halftime that if we played in the second half like we’d already won the game, they’d come back on us,” said Woodard. “We had a couple stretches in the second half where we didn’t play up to our standard, but I was proud that we were able to get through that. Happy for these guys, it was a special night.”

Barring the outcome of the West Lincoln versus Amite County game next week, the Jackets are poised to make the 2A playoffs in two weeks as the no. 4 seed from Region 7-2A.

Scoring was hard to come by on a rainy homecoming night at King Field for Brookhaven as the Laurel Golden... read more