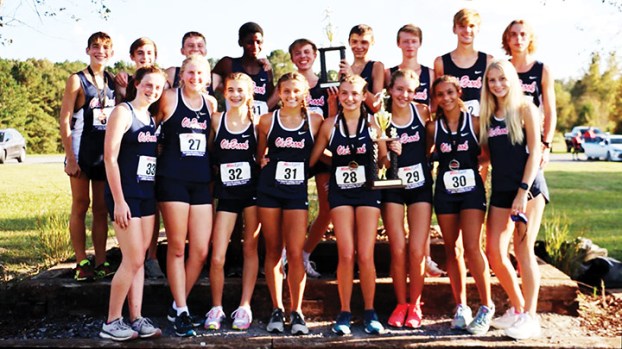 Photo by Terri Mabile The Brookhaven High cross-country team dominated their region meet held last week in Clinton. The final race of the season for the Panthers is Saturday at Choctaw Trails in the MHSAA 5A state championship meet.

This weekend brings on the beginning of the MHSAA state cross-country championships in Clinton.

The races will be held at the revamped Choctaw Trails and begins Saturday with the 5A, 3A and 1A competitions.

The Brookhaven High boys’ team are strong favorites to repeat as 5A state champions when they race Saturday at 11:40 p.m.

In the Region 3-5A race last week, the Panthers won another region title by having the top nine finishers in the race.

Junior Sam Arnold was the top racer on the 5K course with a time of 16 minutes and 55 seconds. Juniors Grayson Childress (17:22), Trey Knott (17:32) and Jake Thompson (17:54) finished in second, third and fourth places, respectively.

Sophomore X’Zavion Stewart (18:27) and junior Collin Kellum (18:42) were the fifth and sixth place finishers. Freshmen Wyatt Scott (19:36) and Robert Massengill (20:25) were the seventh and eighth place finishers and sophomore Jeremiah Layton (20:52) was the ninth overall finisher.

Natchez was the only other school competing in the region race. Saturday in the state meet, the Panthers will compete against teams from Center Hill, East Central, Gautier, Lafayette, Long Beach, Neshoba Central, New Hope, Pascagoula, Pearl River Central, Picayune and Saltillo.

It was the sixth-straight year for BHS to sweep top honors at the region meet.

It’s been three straight years of runners-up finishes for the Lady Panthers at the state level. They’ll get things started Saturday at 11 a.m. with their race.

In the region competition, BHS was led by eighth grader Raney Scott, who finished first overall with a time of 22:19. Sophomore Ramie Stovall (22:38) was the second-place finisher and junior Ellie Slay (23:46) came in third overall.

The eighth-grade duo of Annabelle Summers and Ella Thompson finished in fourth and fifth place for BHS, while junior Amy Mabile was the sixth-place overall finisher and junior Merritt Wolfe came in seventh.

When the gun goes off Monday at 3 p.m. to start the 2A girls’ race, all eyes will be on Loyd Star junior Aubrey Britt as she seeks to win her fourth-straight individual state title.

Britt cruised to first place at the region meet with a time of 21:49. Her sophomore teammate Shanna Moore (26:41) was second and Wesson seventh grader Macy Loy (27:01) was the third-place finisher.

Madelyn Spring of West Lincoln will also compete in the 2A state meet as a single competitor. Her teammates who ran in the region race include freshmen Alaina Mathis (32:15), Alexis Johnson (33:22) and Lari Reed (34:01).

West Lincoln was the top team in the boys’ competition at the Region 7-2A meet last week. Junior Chase Spring (19:51) finished first and his senior teammate Tiler Castillo (20:34) was the second play finisher.

The 2A boys’ race begins at 3:40 Monday and Castillo is the defending 2A individual state champion.

Wesson freshman Preston Selma (20:50) was the fourth overall finisher behind Leake of West Lincoln and ahead of McCullough of Loyd Star.

Friday night on Harry Cole Field, the Enterprise Yellow Jackets looked like the Greek army at the sack of ancient... read more