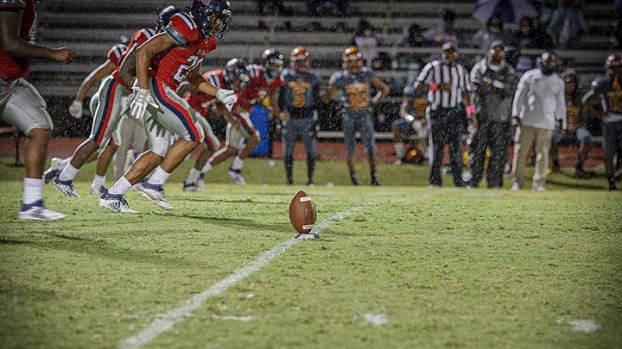 Photo by Lucas Calvert This Friday is the final week of regular season action for area Region 7-2A teams. Brookhaven Academy begins the playoffs while Brookhaven High has two more regular season dates remaining. Lawrence County is off this week ahead of the postseason beginning next week for them as well.

Final week of regular season for 2A teams

Region 7-2A regular season play wraps up Friday ahead of the MHSAA 2A playoffs that begin next week.

For Brookhaven Academy, the playoffs are now as the Cougars host an MAIS 4A opening round game on their home field.

Brookhaven High is on the road as they travel to Adam County for a big divisional matchup with Natchez High.

Coach Jeremy Loy and his Cobras (6-2) look to wrap up their season with a perfect division record when they host Enterprise (2-6) in H.L. Stone Stadium.

Last week in a 40-14 win over Loyd Star, the Cobras got 235 yards passing from sophomore QB Will Loy. Loy tossed touchdowns to four different receivers and had one interception.

Senior running back Jason Edwards continued his strong play with 72 yards on seven carries. Junior linebacker Collin McGowan led the Cobra defense with a whopping 21 tackles including five for a loss. McGowan also forced a fumble.

In a 34-14 win over Amite County last week, Enterprise had four different players rush for over 40 yards. Tops was quarterback Matthew Burns with 78 yards on 11 carries. Burns scored three times on the ground.

The other EC quarterback — senior Lawson Chemin — rushed three times for 76 yards and a TD. Speedster Edrick McCray carried the ball 13 times for 58 yards and fullback Jordan Stephens bullied his way to 41 yards on 13 carries.

Chris Walker led the EAC defense with 11 tackles. Stephens and Michael Kees had seven stops each.

Coach Brian Ford and his Hornets (3-5) want to end the season with a win against a Bobcat (4-4) team that will host a first-round playoff game next week.

In a loss last week to Wesson, the Hornets got 48 yards on 25 carries from Eric Birch.

Last season BC captured the possum trophy with a 55-22 win over LS.

If you are an Enterprise fan, then Friday night you are rooting for the West Lincoln Bears.

If the Bears (4-4) beat the Trojans (1-7), then West Lincoln will finish as the No. 3 seed in the division while Enterprise goes to the postseason as the No. 4 seed.

Amite County needs to beat WL by 12 points or more to qualify for the playoffs and squeeze EAC out of the picture.

Junior running back Enrico Price led the Bears with 132 yards and one score on 20 carries in the loss last week to Bogue Chitto. Senior Chris Freeman also had a TD on the ground for coach Brad Bland.

The Cougars are hosting a team from the Delta in the Lee Academy (Clarksdale) Colts.

A win by coach Ron Rushing and his squad will have BA on the road next week facing a North Delta School team that has a first-round bye.

The Brookhaven High versus Natchez rivarly is one that has heated up over the last few years with both teams trading wins on their home fields.

Friday night, BHS hopes to break that cycle by beating the Bulldogs (2-3) on their home turf.

Brookhaven High (1-2) stuck close with Laurel last week in a loss before the Golden Tornadoes pulled away late for a 34-12 win.

The Bulldogs are under the direction of first-year head coach Randy Craft. They’ll put the ball in the air as junior quarterback Kyreek Murray has thrown for 1,067 yards, 12 scores and eight interceptions thus far in 2020.

Brookhaven High wraps up regular season play next week on King Field when the Panthers host the West Jones Mustangs.

Anderson, Waldrop are The Daily Leader Players of the Week