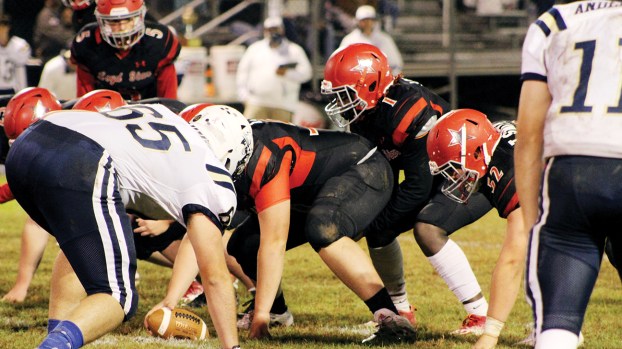 Photos by Cliff Furr Bogue Chitto retained the Possum Bowl trophy Friday with a 27-20 overtime win against Loyd Star. The game was a back and forth battle that saw five lead changes and a 20-20 tie at the end of regulation.

It took an overtime period to decide the 2020 Possum Bowl on W.E. “Sambo” Smith Field Friday.

A 3-yard Reid Smith touchdown run proved to be the game winner for Bogue Chitto as they held off the homestanding Loyd Star Hornets for a 27-20 victory.

The game was tied 20-20 to end regulation as the Hornets won the toss and chose defense to start OT.

Smith ran for seven yards on first down and then took a fullback dive on second down to give his team the go-ahead score.

The Bobcat defense stuffed the Hornet running game three straight plays and on fourth-and-goal from the eight-yard line a Julius Smith pass attempt fell incomplete to give BC the win and keep the trophy that features a possum sitting in a bowl on Highway 51 for one more year.

If Vegas had been setting odds for this one there is no doubt the Bobcats would have been heavy favorites.

Coach Gareth Sartin and his team are 5-4 on the season and finished second overall in Region 7-2A. They’ll host a playoff game next week on Troy Smith Field.

The Hornets and coach Brian Ford finished the season 3-6 and had one of the youngest rosters in the region with just a handful of seniors on the squad.

One of those seniors is running back Erick Birch, who played like a man possessed when he touched the ball all game long.

His 45-yard run with 68 seconds remaining in the second quarter broke what had been a scoreless game. Smith found sophomore Bryce Ford on the conversion pass and LS led 8-0.

Bogue Chitto didn’t take long to respond as quarterback Colton Frith found a wide-open Cameron Williams behind the Hornet defense for a 70-yard TD pass. The conversion attempt was no good and LS led 8-6.

The Bobcats always go for the onside kick and after their first TD they recovered said kick as Deacon Wallace pounced on the ball.

That extra possession proved to be important as BC quickly drove down and got a 28-yard field goal by Carson Price as the halftime horn went off to take a 9-8 lead at the break.

Defensively, Loyd Star got a shutout effort in the first half other than that one big pass play. The Hornet defenders were bottling up any attempts by BC to run to the outside as senior Colby Carwlye, and sophomore Lezeric Brothern were among many Hornets who pursued the ball well.

Loyd Star responded in the third quarter when Smith found freshman Austin Henderson on a seven-yard touchdown pass that put the Hornets back up 14-9.

On the second play of the fourth quarter, Bogue Chitto finally got the big play they’d been looking for as Frith hit a wide-open Owen Anderson on a screen that put BC back up.

The Bobcats again recovered the onside kick and with just under 10 minutes left they had momentum and the ball at midfield.

The Hornet defense again stepped up as Julius Smith stripped Anderson and recovered the ball, it was the second takeaway of the game for Loyd Star as their sideline came to life.

Birch put his team on his back on the ensuing drive as his runs and a long catch by senior J.T. Smith quickly moved the Hornets back into scoring range.

With 6:56 remaining LS got their final score of the night on a 3-yard plunge by Birch. The conversion attempt failed, and the Hornets led 20-17.

A go-ahead score on a sweep by J.T. Smith went for 50-yards on the following drive for Loyd Star but was called back by a hold as the teams were then content to go to overtime.

“We played hard and tonight we took some chances. Some of them worked for us and some of them didn’t,” said Ford after the game. “At the end we made too many mistakes to win, but we were right there with them.”

BC will host Puckett next week in the opening round of the 2A playoffs. The Wolves beat the Bobcats in Bogue Chitto on Sept. 18 by a final score of 20-14.

Coming off a two-week shutdown due to COVID-19, the Copiah-Lincoln Community College Wolves were back in Stone Stadium Thursday night... read more