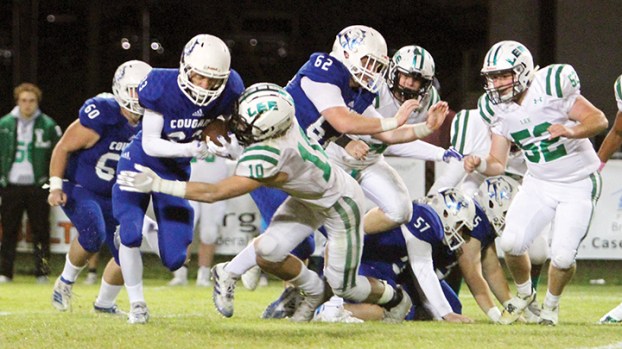 Photo by Sherylyn Evans BA senior running back Luke Johnston fights for yards against the Lee Academy defense Friday on R.M. “Red” Stuard Field. Johnston carried the ball five times for 22 yards as the Cougars had little trouble with Lee in their playoff opener.

It would appear that the Brookhaven Academy offense is clicking at just the right time. Friday in their MAIS 4A playoff opener, the Cougars generated 381 yards of total offense in cruising to a 35-6 win over Lee Academy.

It was the fourth-straight year for BA to host an opening round game under coach Ron Rushing and the Cougars have now won all four of those games in convincing fashion.

Next up for the Cougars is a trip to Batesville for a second-round game against the North Delta Green Wave (8-2).

North Delta had an opening round bye as they are the no. 2 overall seed in the playoff bracket. They defeated Lee 35-14 on Oct. 16.

Junior quarterback Tyler Fortenberry threw for a pair of scores and ran for two touchdowns against Lee. He also returned an interception for a score as well.

August Sullivan led the Cougar defense with five tackles. Lee managed just 17 yards passing in the game. Trevor Fortenberry and Caleb Carithers each made two tackles apiece for a loss.