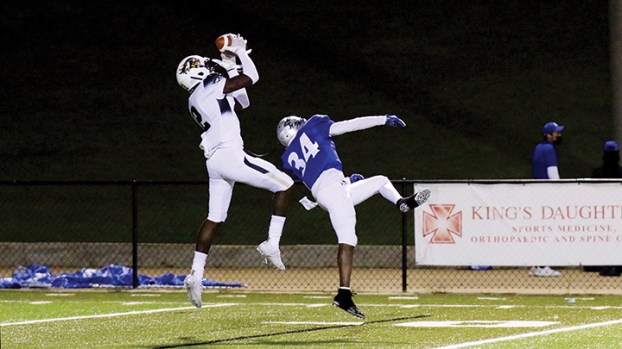 Photo by ECCC Sports Info East Central wide receiver and Brookhaven High product John Hilbert goes up for a 36-yard touchdown catch in the fourth quarter Thursday at Co-Lin. Hilbert’s catch and score tied the game late as ECCC took a 13-10 overtime victory over the Wolves.

Coming off a two-week shutdown due to COVID-19, the Copiah-Lincoln Community College Wolves were back in Stone Stadium Thursday night to face the East Central C.C. Warriors.

In a low-scoring game that saw both teams struggle to move the ball after halftime, East Central used a fourth quarter TD to force overtime and then handed the Wolves (2-1) their first loss of the season when Robens Beauplan knocked through a 27-yard field goal to give his team a 13-10 victory.

Earlier in the OT period, Co-Lin had a field goal attempt of their own blocked by ECCC. The Warriors moved their record to 2-3 and grabbed a win over CLCC for a second straight year. The Wolves had previously won 10 games in a row over East Central.

Offensively for the Warriors, their biggest efforts came from a pair of players that hail from Copiah and Lincoln counties.

Freshman running back Larry Wilson is a Hazlehurst High product that carried the ball 28 times for a career-high 104 yards — becoming the first ball carrier to eclipse the century mark against the Warriors this season.

Trailing 10-3 in the fourth quarter as the teams were trading punts for a combined nine straight possessions, it was sophomore wide receiver John Hilbert that tied the game for the Warriors on a 36-yard pass from quarterback Holman Edwards.

Hilbert is a Brookhaven High alum who signed with ECCC after a being the leading pass catcher for the Panthers for three straight seasons. He finished the night with five catches for 89 yards.

Penetration from the East Central defensive front plagued the Wolves all night as they managed just 216 yards of total offense.

Sophomore CLCC quarterback Paul Hargrave (Natchez High) finished 12-of-27 for 153 yards. Hargrave and the Wolves marched down the field on their opening drive behind long completions to Erick Rogers (Shannon HS) and Dontavious Turner (South Pike).

Sophomore running back Drexlan Allen (Hattiesburg HS) capped the drive with a 1-yard TD run that gave the Wolves a 7-0 lead with 6:32 remaining in the first quarter.

The final Co-Lin score of the night came with 3:57 left before halftime when sophomore kicker Bryce Lofton (Pisgah HS) booted a 37-yard field goal to make the score 10-0.

Three minutes later ECCC finally got on the board when Beuplan notched a 32-yard field goal with less than a minute remaining in the half.

The ECCC defense got 12 tackles from linebacker Trenton Ladner. Ladner also had a sack, three tackles for a loss, forced a fumble, broke up a pass and blocked the Co-Lin field goal attempt in overtime.

Co-Lin returns to the field on Thursday, Nov. 12 when they travel to Ellisville to face Jones College (3-1).