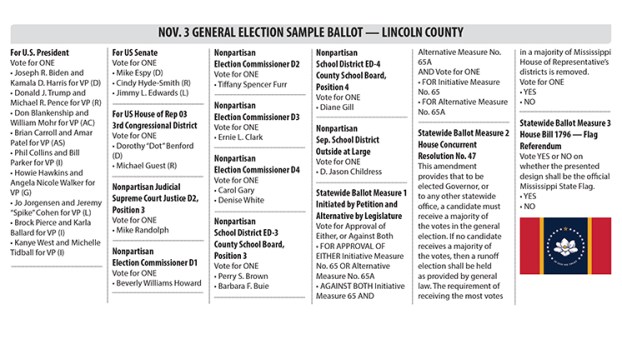 Have you cast your vote yet?

Election Day 2020 is only days away and voters are already making their voices heard.

While candidates for U.S. president and various other political offices at many levels of government are preparing for whatever changes or reassurances Tuesday may bring, potential voters in Mississippi have already set at least one new record in the voting process. More absentee ballots have been requested, completed and returned for this election than ever before, according to the secretary of state’s office.

Nearly 170,000 absentee ballots had been requested as of one week ahead of the election, Secretary of State Michael Watson said, and about 142,600 had been completed and returned by Oct. 25. In 2016, the last time a presidential race was on the ballot, 103,000 absentee ballots were cast in the state.

Mississippi is one of five states with no-excuse early voting. Absentee voting is open to anyone age 65 or older who has a temporary or permanent disability, and to anyone who will be working or out of town on Election Day. The last day to vote absentee in person is Saturday, Oct. 31, in the circuit clerk’s office between the hours of 8 a.m. and 5 p.m. Mailed absentee ballots must be postmarked by Nov. 3 and received within five business days after Election Day.

Curbside voting is also available for the first time in Mississippi for people with symptoms of COVID-19.

Lincoln County Circuit Clerk Dustin Bairfield wants voters to be considerate of others when going to the polls Tuesday, wearing masks and standing at least six feet apart in the precincts.

“Have your driver license ready, out, as your photo ID,” Bairfield said.

The third measure is on the adoption of a new state flag, the “In God We Trust” design proposed by the State Flag Commission. A “yes” vote will be to accept the new design and a “no” vote will return the matter to the commission to select and present a different design in a separate future election.

A sample ballot and other forms can be downloaded at www.dustinbairfield.com by clicking on “Forms.”

Will voters know who won on election night?

The simple answer is probably not.

Millions of Americans have already voted, but each state has different rules on when it’s allowed to actually start counting those ballots. That is going to produce results coming in at very different times — perhaps days or even weeks after Election Day.

In some places, election officials can begin processing ballots weeks before Election Day. That means workers can start verifying voter information while also removing ballots from their envelopes to physically get them ready for tabulation. Doing so readies ballots for counting on Election Day and will speed up the release of results.

But it’s not that simple.

In some of the most critical battleground states, laws prevent the early processing of ballots. So on Nov. 3, Election Day, officials will have to run an in-person election while also working through the unprecedented number of mail-in votes. This dynamic is likely to delay results and heighten the potential for big shifts if in-person vote tallies are upended by the counting of mail-in ballots.

President Donald Trump has repeatedly warned of voting fraud without offering any evidence. Because of that, there are concerns that he will use delays in vote-counting to declare results illegitimate. While results might come in later than usual this year, that’s because of a change in how people are voting, not malfeasance or fraud.

Here is another wrinkle: Nationwide delivery delays at the U.S. Postal Service are sparking fears that ballots might not arrive in time to be counted. Republicans, including Trump’s campaign, have been filing lawsuits to stop election officials from counting ballots that are delivered after Election Day.

A shift to mail voting is increasing the chances that Americans will not know which party won the White House on election night, and it could also delay a final call on control of the Senate. But that doesn’t mean the results will be fraudulent.

Election officials in some key battleground states have warned that it might take days to count the votes given what they expect will be a surge of ballots sent by mail.

More than 58 million advance votes have already been cast.

Twenty-eight states require mail-in ballots to be received on or before Nov. 3 in order to be counted. Mail-in ballots may be received after Nov. 3 and counted in the other 22 states and the District of Columbia.

Of the 28 pre-Election Day receipt states, six states permit counting of absentee votes prior to Election Day, 15 permit absentee counting on Election Day prior to polls closing, and five restrict counting until after polls have closed. Three states have rules that vary by locality.

Mississippi allows votes to be received up to five business days after the Election, and counting of absentee votes cannot begin until after the polls have closed.

“If you’re unsure where to vote, your precinct, please call us on Monday before Election Day at 601-835-3435,” Circuit Clerk Bairfield said.

Big Springs and Little Bahala precincts are at the corresponding Baptist churches. Montgomery precinct is at Clear Branch Baptist Church and Johnson Grove is located behind Johnson Grove Church of Christ.

Polling places will be open Election Day from 7 a.m. until 7 p.m.

On Nov. 3, Mississippi voters will be asked whether they want to legalize the use of medical marijuana in the... read more