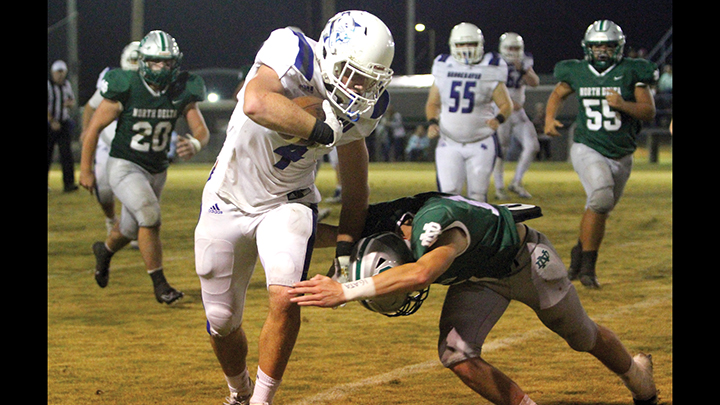 Photo by Sherylyn Evans Brookhaven Academy senior receiver Trey Fortenberry and the Cougars have an MAIS 4A title game berth on the line Friday when they travel to Waynesboro to face the Wayne Academy Jaguars.

Win or go home — that’s what the four remaining area schools are facing Friday in MAIS and MHSAA playoff action.

Brookhaven High knocked out by COVID-19
Due to a school wide quarantine the Brookhaven High football team was forced to forfeit their Friday night trip to face Pascagoula in the opening round of the 5A playoffs.

BHS lost to West Jones Friday night in their regular season finale and were slated to play Pascagoula in Jackson County this week.

Pascagoula moves on to face the winner between Hattiesburg and South Jones.

Mangum was a head coach at Ocean Springs and Wayne County where his team won the 2015 5A state title with a 45-41 win over Oxford High.

In his first year at Wayne Academy Mangum has a team that’s 8-3 and in the MAIS 4A semifinals after beating Tri-County Academy 28-10 last week.

The other semifinal game has Winston Academy (7-4) playing Riverfield Academy (9-1).

Wayne earned a first-round bye in the playoffs after finishing as one of the top four seeds in 4A. In their regular season finale Wayne whipped Winston 34-14.

Cathedral beat Wayne 34-14 in the season opener for both teams back on August 14. Since then the Jags have only lost twice.

One of those defeats was to 6A Presbyterian Christian and the other was to 5A Leake Academy (10-0).

The Cougar defense led the way in the win at North Delta. Carter Smith made a team high nine tackles for coach Ron Rushing. August Sullivan chipped in seven tackles and a sack as the Cougars kept North Delta from gaining 100 yards on the ground.

Wesson vs. Union
The Union Yellowjackets (8-2) bring a big, balanced team to Stone Stadium Friday to face Wesson in the MHSAA 2A playoffs.

The only division loss for coach Jordan Wren and his team was a 38-33 setback to Scott Central (8-1).

The Jackets also lost 28-7 to 4A contender Newton County earlier in the season.

Offensively Wesson coach Jeremy Loy expects Union to mainly run the ball behind a big offensive line, but the Yellow Jackets do have a capable quarterback and wide receiver that helps them move the ball via the air.

Lawrence County at Sumrall
Coach Jesse Anderson and his Cougars (3-5) are trying to make some more postseason magic this season after getting to the 4A south state title game last season.

Just like they did last year, LC went on the road Friday and won a playoff game over a no. 1 seed. The Cougars jumped up early on Moss Point and then held off the Tigers to get a win in Jackson County.

Bogue Chitto at Scott Central
As the playoffs continue more schools are gaining the next round by forfeit due to their scheduled opponent facing COVID-19 related quarantine.

Bogue Chitto was one of the first teams in the state to experience this they moved past Puckett last week in the opening round due to the Wolves quarantining.

In Scott Central (8-1) BC is facing a program that is one of the heavyweights in 2A football.

The Rebels are 46-7 combined over the last four season and won the 2018 2A state championship by finishing with a 15-1 record.

Last year Scott Central finished 11-3 and made the 2A semis where they were beaten by eventual state champion Taylorsville.

This season the Rebels only loss was to 5A Neshoba Central (8-1). Last week in their playoff opener Scott Central routed St. Patrick 44-0.

Bogue Chitto (6-4) and coach Gareth Sartin were runners-up in Region 7-2A.

Bogue Chitto will look to their skills players in running backs Owen Anderson, J.T. McCaffrey and Reid Smith to move the ball and keep the SC offense off the field.

Sophomore quarterback Colton Frith has been a steady hand leading the BC offense behind a veteran offensive line.

On the defensive side the Bobcats count on linebacker Colton Bales and defensive backs Cameron Williams and Tristan Buffington to lead the team in tackles.

Antrelle Sims plays like an All-Star, despite being snubbed