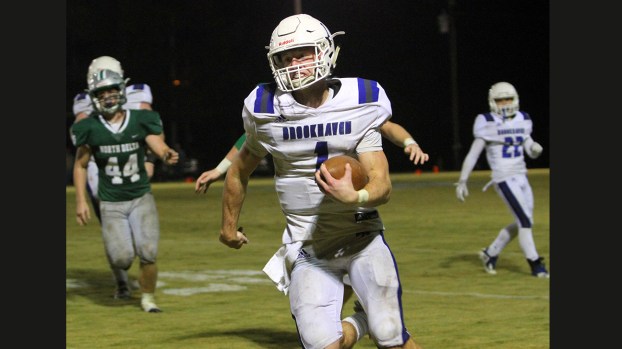 Photo by Sherylyn Evans Brookhaven Academy junior quarterback Tyler Fortenberry ran for one score and threw for another Friday night but the Cougars couldn't overcome a potent Wayne Academy rushing attack in a 49-21loss.

The Brookhaven Academy Cougars (8-5) ran into an offensive buzzsaw Friday night as the Wayne County Jaguars (9-3) ran out to a 49-14 win in their MAIS 4A semifinal matchup in Waynesboro.

Wayne Academy quarterback Stone Ross is the straw that stirs the drink for the Jag offense and Friday night he proved to be hard to stop.

Ross only completed four passes in the game but sprinted up and down the field for 239 yards on 21 carries.

A 44-yard rush by Ross on the opening drive of the game set up a score that put Wayne Academy ahead 7-0.

The first offensive series for the Cougars was a preview of things to come as heavy WA pressure forced a sack on the BA 1-yard line.

The Cougars punted from their own endzone but held the Wayne offense in check on the next drive to get the ball back.

A 92-yard drive by BA took the air out of the large Wayne County crowd as the Cougars moved the ball for a tying touchdown.

A leaping catch by sophomore receiver Trevor Fortenberry from his brother Tyler set up the TD as Trevor went over a Wayne defender to come down a the 4-yard line.

On the next play, Tyler crossed the goal line on a keeper and the Corey Case PAT kick knotted things at 7-7.

Wayne Academy responded on its next offensive play as Ross raced 71 yards for a touchdown that came with 1:32 remaining in the first quarter.

Brookhaven Academy head coach Ron Rushing had identified stopping big plays as the most important task for his team ahead of the game.

That proved to be the difference as a Ross touchdown scamper from 46 yards put WA up 21-7 with eight minutes remaining until halftime.

Wayne got one more first half TD when Cross Kittrell scored on a 42-yard interception return.

Trailing 28-7 at the break, Rushing and his staff worked to make adjustments that would get the Cougars back in the game.

Coming out of halftime, BA put together their second scoring drive of the night as they ate up three and a half minutes and culminated things with Tyler Fortenberry hitting Dylan Fortenberry on a 12-yard TD pass.

There would be few highlights for the Cougars after that though.

Kittrell scored a pair of rushing touchdowns in the third quarter that came just one minute apart as BA was hurt by three turnovers on the night.

A 12-yard rushing score from Collin Trigg with just over eight minutes remaining in the game triggered a running clock for the rest of the contest.

A 6-yard scoring run by senior Luke Johnston put the final points on the board for BA.

Tyler Fortenberry finished 27-of-42 passing for 253 yards and one score. The leading receiver for BA was senior Dylan Fortenberry with 12 catches for 101 yards.

On the ground Tyler Fortenberry carried 11 times for 38 yards while Johnston picked up 26 yards on three carries.

Wayne Academy moves on to face Riverfield Academy (10-1) in the MAIS 4A state title game Friday at Jackson Academy.

It was another slugfest for the Cobras this week as they went toe-to-toe with the Union Yellowjackets in the second... read more