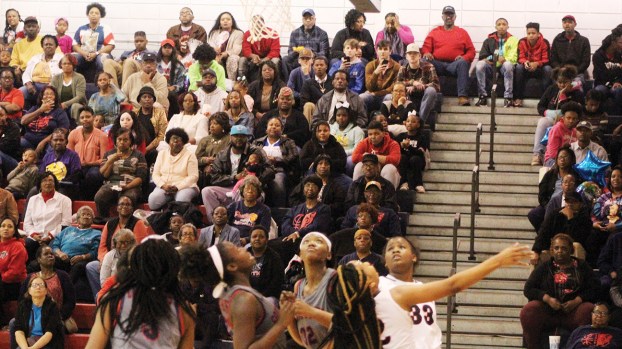 Daily Leader file photo A crowd of fans shoulder-to-shoulder in Sinclair Gymnasium for a basketball game isn’t something one should expect to see in 2020 as coaches and administrators work to solve the issues faced by playing sports inside during a pandemic.

Basketball off to slow start as COVID-19 causes cancellations

Editor’s Note: The Brookhaven Academy versus East Rankin game scheduled for Friday has been cancelled. BA will now travel to Newton Academy on Thursday with four games beginning at 4 p.m.

The first two weeks in November are usually when high school basketball in Mississippi is getting cranked up, but that’s not the case right now as schools, coaches and administrators are still trying to figure out how an indoor sport like hoops will be played and spectated during a pandemic.

Brookhaven Academy has had a head start on everyone as the Lady Cougars played their first basketball game back on Oct. 26

The team is 2-2 and the boys’ team is 0-1 but with football season finished — boys’ coach Josh Watts will now have his full complement of players.

Friday BA is scheduled to host East Rankin in the first true home game of the season that will have junior high and high school games for both boys and girls played in John R. Gray Gymnasium.

Big crowds in the gym are part of basketball culture throughout Southwest Mississippi, especially at a place that has a tradition of winning like Brookhaven Academy.

BA girls’ coach Ron Kessler is also the assistant athletic director at the school. He says the Cougars and their MAIS District 4-4A cohorts (Oak Forest Academy, Cathedral School, ACCS, Silliman Institute) recently met to come up with policies that all the schools will use during division play.

Kessler says the Cougars will use those same guidelines going forward for all of their home games.

Junior high quarters have been shortened to six minutes with a five-minute halftime.

Each team member whether they be a junior high girl, or a varsity boy gets four tickets for their family to come watch their game in person.

It’s suggested that fans of each game leave the gym after their child’s game as to make room for the next crowd of spectators.

“We’re not going to physically make people leave, but we’d like for fans of each game to clear out so that there is enough room for the next group to socially distance in the bleachers,” said Kessler.

There will be some other small tweaks such as no starting lineups announced and no post-game handshake line.

Masks are not required but encouraged, especially when moving within the gym.

The visiting team will have the same cap on the number of fans allowed in for each player.

“We’ve definitely had to be flexible,” said Kessler. “We’ve already had Simpson, Copiah and Lamar cancel games with us due to COVID-19 issues at their schools. We hope to reschedule some of those games, but we knew Hillcrest was looking for games too, so we picked up a game against them for Saturday.”

Across the state in both the private schools of the MAIS and the public schools of the MHSAA there is variety in what criteria causes a team or school to cancel a game or move a team into quarantine.

In some places it’s if an athlete tests positive, while in others quarantine can be triggered by a positive test from the parent of a teammate.

When the Brookhaven School District made the move to virtual learning through the Thanksgiving holiday that meant that BHS sporting events would not be played as well during that time.

Both Brookhaven High basketball teams have 1-1 records on the season and their next scheduled game as of now is Dec. 4 at Franklin County.

It’s a similar story at Loyd Star where the boys are 0-2, the girls are 1-1 and neither team will play again until the Lincoln County Tournament starts on Dec. 1.

Bogue Chitto, Enterprise and West Lincoln are still playing as of press time, but their games ahead of the county tournament are fewer than normal.

Enterprise will play their third game of the season when they travel to Mize Friday. Bogue Chitto is scheduled to host Madison-St. Joe Saturday for a girl’s game. The BC boys haven’t’ played a game yet as they await quarantined football players to get the clearance to begin practice.

West Lincoln coach Brooks Smith laid out the fan attendance policy that his school and the other Lincoln County schools are using at the moment.

“Right now, we’re at 25 percent capacity which for us works out to 150 tickets for our fans and 150 for the visiting team,” said Smith. “Tickets must be bought in advance as none will be sold at the door.”

West Lincoln will also have just two games under their belt when the county tournament begins after Thanksgiving.

Bucks getting Holiday to play with Antetokounmpo

Point guard Jrue Holiday is being traded from New Orleans to Milwaukee, which is aiming to give two-time reigning NBA... read more