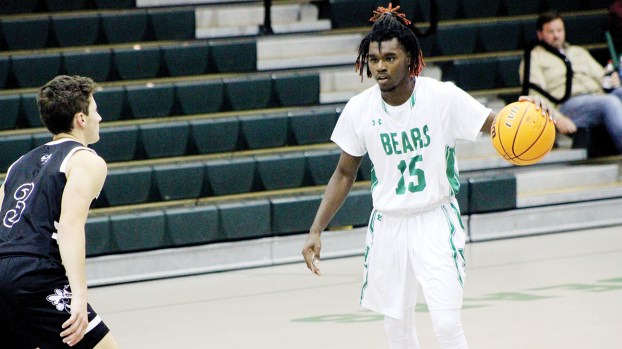 Photo by Cliff Furr West Lincoln senior point guard Ty Brotherns is the leading returning scorer for a West Lincoln team that graduated four starters last season. Brotherns and the Bears will play in the Lincoln County Tournament after Thanksgiving.

Yellowjackets’ size too much for the Bears to handle

A larger Oak Forest Academy team got buckets close to the basket Tuesday in Jack Case Gymnasium while the homestanding West Lincoln Bears misfired from deep.

That was the difference in a 56-32 win for the visitors from Louisiana.

West Lincoln doesn’t have much height to spare this season without a player over 6-foot in the current starting lineup.

When senior 6-foot-3 forward Dylan Dickerson rejoins the team he’ll bring some size, but right now he’s on the bench wearing street clothes due to an injury that happened during football season.

All but three of the 11 players on the roster for West Lincoln coach Brooks Smith played football.

The Bear football team finished up their season on Nov. 6 and the basketball season began for WL on Nov. 12 with a loss at Madison-St. Joe.

“We’re a work in progress,” said Smith. “We went 12-of-51 from the floor against St. Joe and I imagine we were something similar tonight. We’re getting the looks but not having much success right now.”

For the Bears to get things going offensively they’ll need senior point guard Ty Brotherns to lead the team in scoring.

Brothern is the most experienced player on a young team after averaging 9.3 points per game last season and against St. Joe he led the team with 13 points. Against Oak Forest he was held to eight points.

Joining Brotherns in the starting lineup are forwards Enrico Price and Tate Smith — both fresh off the football field.

Sophomore Tristin Rollins and senior Spencer Maxwell are first year starters for the Bears on the perimeter.

Rollins scored a team high 18 points for WL with all six of his made baskets coming from behind the 3-point line.

Having height one season and none the next is just the way small school basketball goes sometimes as West Lincoln was one of the biggest teams in Region 7-2A last season with 6-foot-7 forward Keshon Byrd playing in the middle.

Byrd signed a scholarship with Copiah-Lincoln C.C last year, before deciding he was done with basketball ahead of school starting in the fall.

Last season the Bears had a team built around Byrd, leading scorer Karlton Byrd (20 ppg), senior shooter Anthony “Peanut” Hughes and athlete Michael Brothern that finished 14-13 (7-3 in division play) before being eliminated in the MHSAA 2A playoffs by Heidelberg.

Senior Trevon Jones comes off the bench for the Bears along with sophomore Javarius Lewis and freshmen Baylor Sills and Carson Temple.

Price scored four points and Sills added two to round out the West Lincoln scoring.

Coached by Curtis Matherne, the Yellowjackets are members of MAIS District 4-4A along with Brookhaven Academy.

“Our hope is always to be playing our best basketball when region play begins after Christmas,” said Smith. “That takes work though and you want them to start realizing that you can’t just walk in the gym and expect the results you want. You’ve got to put in the time and work.”

West Lincoln is scheduled to participate in the Lincoln County Tournament the week after Thanksgiving.

On Dec. 8 the Bears are slated to play at Richland and then on Dec. 11 they’ll go back to Rankin County to play at Puckett.