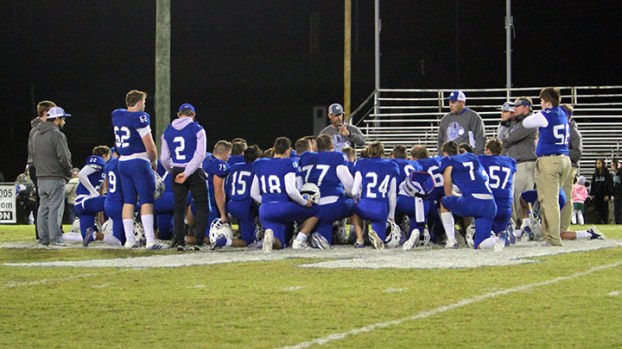 Photo by Sherylyn Evans Brookhaven Academy coach Ron Rushing and his Cougars will remain in the same football district next season but they’ll have a new group of teams to compete against after the MAIS released their annual realignment plan.

The Midsouth Association of Independent Schools (MAIS) has finalized the athletic realignment plan to be used for the 2021-2023 school years.

This is the second cycle of counting students for which the MAIS has used a new criterion in creating football divisions separate from the other sports.

The numbers used to decide football classifications is a count of all male students in grades 8-11 of member schools.

The 1A and 2A classes play 8-Man football. The 6A division is made up of the six largest schools in the association and the rest of the schools are as evenly dispersed as possible through 3A, 4A and 5A.

There are 54 schools in the association that play traditional 11-man football and another 29 schools that play the 8-man version of the game.

Brookhaven Academy will remain a member of the 4A class in football for the next two seasons although their district competition will change.

For all sports other than football the schools do a traditional count of all students in grades 8-11. In those sports the Cougars will move up to the 5A classification beginning in the fall of 2021.

There are 18 schools in the 4A football class as Adams County Christian has moved down from 5A and will play in District 3 with Riverfield Academy, St. Aloysius, Tri-County Academy and Clinton Christian Academy.

In 6A the only change was Oak Forest Academy dropping down to 5A and being replaced by Hartfield Academy. The other 6A football schools are Jackson Prep, Jackson Academy, Madison-Ridgeland Academy, Parklane Academy and Presbyterian Christian School.

The MAIS also picked up a new member school this year with Madison-St. Joe leaving the MHSAA and signing on as a 5A school.

In sports other than football, Brookhaven Academy will be a member of District 4-5A.

That means that basketball, softball and baseball among the other sports will be in a district with Columbia Academy, Bowling Green School, Oak Forest Academy and Silliman Institute.

There are 23 schools in the 5A non-football classification.

MAIS football teams play a 10-game regular season that begins in August and concludes with state title games being played the week before Thanksgiving.

(AP) — Even after Jason Witten’s touchdown put the Las Vegas Raiders ahead with 1:43 to play, the mood on... read more