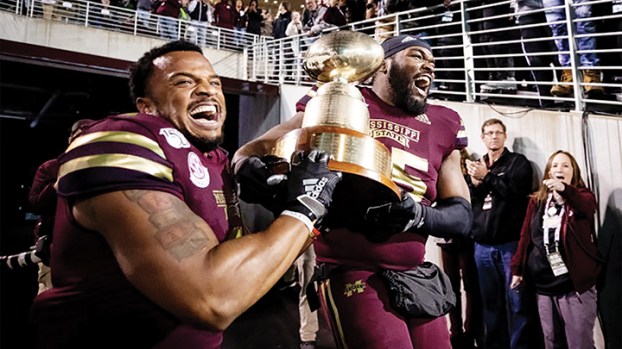 Photo by MSU Sports Info It was all smiles a year ago in Starkville for Mississippi State as they held on for a 21-20 Egg Bowl victory. The rivalry renews today at 3 p.m. in Oxford as Ole Miss looks to break a two-game losing streak in the series.

UM, MSU meeting for the Golden Egg in Oxford

It’s a salve that can take away most football related pains. It’s a medicine that fans of Ole Miss and Mississippi State can or can’t take for a year afterwards — depending on the outcome.

It’s a cleanser can make a tough season with a bitter aftertaste a little more palatable.

And any fan that tells you it’s just another game (they’re not really our rival, our real rival is LSU or our season doesn’t hinge on that one game) is lying to his/herself.

Ole Miss and Mississippi State want to beat each other every year. Badly. Period.

The Battle of the Golden Egg has been played as the regular season finale for both teams since 1947 (excluding the 2001 season which was affected by the attacks of 9/11).

That won’t be the case this season though as both teams have more football to play — COVID-19 willing — in 2020.

MSU still has a Dec. 5 game scheduled against Missouri and a game the following week against Auburn.

The Rebels still have to play LSU and have a possible make-up date ahead of them with Texas A&M.

Moore got down on all fours and mimicked peeing like a dog in the MSU endzone.

The resulting penalty from that urination celebration moved the PAT kick back and Luke Logan missed the 35-yard kick to tie the game.

The new coaches don’t even hate each other — in fact they’re old friends.

The SEC goes to a 10-game regular season schedule.

MSU whips defending national champion LSU and tells the nation to hop on the Leach bandwagon. The team has since won once since the opener against LSU.

Ole Miss scores tons of points every week as Kiffin celebrates on the sideline but would struggle to stop Mississippi Delta Community College from scoring if the teams were to play.

All that leads up to the Rebels (3-4) hosting the Bulldogs (2-5) at 3 p.m. in Vaught-Hemingway Stadium in what can only be described as one of the oddest Egg Bowls ever as the teams meet for the 117th time.

Make a leftover turkey sandwich Saturday afternoon (using only Bunny Bread) and pile the plate with BBQ potato chips. Crack open a beverage of your choosing and keep an eye on these five key players for both sides.

One thing is for certain, Elijah Moore is way more than a guy who made a dumb penalty.

Right now, he’s one of the most unstoppable wide receivers in the nation as he and Corral have built a rapport that’s been compared to football version of Stockton and Malone.

The scouting report on Moore is that he’s a devasting route runner that’s nearly unstoppable in a one-on-one situation. Through seven games he’s caught 74 passes for 1,054 yards and eight scores.

A two-year letter winner that hails from Fort Lauderdale, Florida — Moore has already smashed all of his personal bests in yards, catches and scores from last season. His 159.3 receiving yards and 10.6 catches per game are both tops in the nation.

The MSU defense has had a strong first season under coordinator Zach Arnett. The Bulldogs held Georgia to just eight rushing yards last week and statistically have the fourth best defense in the SEC.

Ole Miss has run for a SEC high 1,489 yards on the ground in 2020. Getting sophomores Jerrion Ealy and Snoop Conner going in the rushing game will be big for the Rebels as State will make stopping Moore a huge part of their scheme.

Baby-faced freshman signal caller Will Rogers has stepped up to become QB1 for the Bulldogs.

His learning curve has been steep as there have been no games against foes like Abilene Christian or Stephen F. Austin to pad the schedule.

After graduate transfer K.J. Costello was injured against Alabama, it’s been Rogers show for every snap and the Brandon High product looks more comfortable from one week to another as he does his job.

Rogers and the Dogs were just good enough to hold off Vanderbilt in his first career start. Last week MSU took a roster short on numbers to Georgia and went blow for blow with UGA in a 31-24 loss.

He only threw one touchdown against Georgia, but Rogers finished 41-of-52 for 336 yards and with no interceptions.

There is a decisiveness with where he wants to go with the ball that Rogers has shown and that’s an area that Costello struggled in as defenses have been dropping seven to eight defenders into coverage against Leach’s Air Raid offense.

He has yet to take the field for the Rebels, but Otis Reese will need to make a big impact in his season debut against MSU.

A transfer from Georgia who played in 25 games while in Athens, Reese came to UM as a transfer expecting a waiver to be eligible in 2020.

That took longer than expected, but Reese was recently declared eligible by the NCAA for game competition. He’s been practicing with the team as the process plays out and Kiffin told reporters this week he expects to see Reese on the field “a lot” against MSU.

Kiffin knows the Rebel defensive backfield needs all the help it can muster as the team is giving up the most points (40.9), yards per game (535.6) and rushing yards per game (243.4) in the SEC.

Reese is a safety and was a four-star recruit out of Leesburg, Georgia.

There is no position group in Starkville this season that’s gotten more criticism than the offensive line.

After missing the Vanderbilt game Cross was back starting at left tackle verses Georgia. In that game Rogers had the cleanest pocket to throw he’s had all season as Cross and his line mates were physical from the start.

State doesn’t run the ball much via a traditional handoff but expect Leach to get it into the hands of his backs at the line of scrimmage against a bad Ole Miss defensive front.

When that happens, they’ll be hunting a hole behind the blocking of Cross.

Lane Kiffin doesn’t really care to kick the ball. The Rebels have attempted just five field goals this season with Logan making three including a long of 39-yards.

He’s 33-of-35 on point-after kicks. Last season the Hattiesburg native came into the Egg Bowl having missed just two PAT attempts on the year.

Then came the celebration penalty on Moore and the missed extra point and MSU players running around the stadium holding up the Golden Egg Trophy for a second straight year.

A win Saturday by the Bulldogs would give them three straight in the series — feat they’ve accomplished just once since 1942.

The Egg Bowl will be televised on the SEC Network. Kickoff is scheduled for 3 p.m.

(AP) — PJ Hall had 10 points on 5-of-6 shooting and grabbed seven rebounds to help Clemson open the season... read more