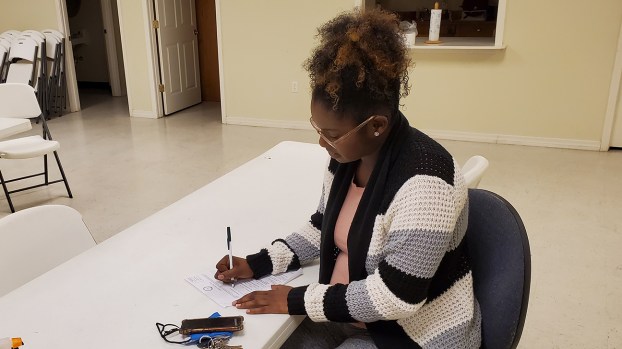 Photo by Brett Campbell / Vivian Hathorn signs a formal complaint to be submitted to the national office of the NAACP against Brookhaven police officer Lisa Jackson.

A Lawrence County woman and daughter of a Brookhaven Police Department officer has filed a formal complaint against BPD officer Lisa Jackson in connection with an incident Nov. 24.

Vivian Hathorn, 23, said she was traveling south on Hwy. 51 through Brookhaven around 5 p.m. when the accelerator on her vehicle became stuck, accelerating eventually to around 90 mph.

Hathorn called her father, Officer Bobby Hathorn, and asked for help. Officer Hathorn, who was working security at a government housing complex at the time, put a call out on the BPD radio channel asking for assistance for his daughter. Units responded and reached Hathorn — whose emergency brake was engaged and brake pedal depressed — as her vehicle suddenly decelerated and came to a stop in front of 51 Gun & Pawn in Bogue Chitto.

“I saw the blue lights in my mirror and was relieved,” Hathorn recalled.

The first officer to approach her vehicle was someone she recognized, an officer Hathorn said had previously played with her two young children and knew her — Officer Lisa Jackson.

Hathorn, 37 weeks pregnant, said Jackson had her gun drawn and opened the truck door before pulling Hathorn out, pushing her to the ground and handcuffing her. When her father arrived at the scene, Hathorn’s restraints were removed and she was helped to her feet. Hathorn acknowledged officers said her father’s message was unclear, though she debates that.

Hathorn filed a formal complaint against Jackson with the Brookhaven Police Department and the national office of the NAACP, alleging Jackson used excessive force and violated her civil rights.

Hathorn was not physically injured in the altercation, nor was her baby — who was born healthy two days later — but says she has suffered from nightmares and anxiety since the event.

“I will be asking (BPD) Chief (Kenneth) Collins and the Mayor that she either be removed from Brookhaven Police Department or that she turn in her resignation,” Cain said.

BPD Chief Kenneth Collins said he is glad Hathorn and her baby are in good health, but that the facts are different from what she has portrayed.

“I’ve got all the reports in,” Collins told The Daily Leader. “The officers were unclear on what they had. At no time did (Officer Hathorn) clearly say, ‘I have a woman whose accelerator is stuck.’”

The police chief said officers are trained to respond in a certain way that ensures their safety and that of the public.

“Everything they did was consistent with the training they had,” Collins said. “If we did something wrong, I’m going to hold my officers accountable. My job is to protect my officers when they are in the right. They didn’t do anything wrong. As long as Tom Brady throws touchdowns, everybody is cheering him on, but the minute he throws an interception, everybody sitting on the couch tells him what he did wrong. You’re not even playing the game. You can’t tell us how to do our jobs the right way.”

Hathorn and Cain said the case would be pursued. While Cain did not explicitly accuse Jackson, who is white, with racism against Hathorn, who is black, he said the officer has “wronged a lot of black people.”

“I feel like, with the complaints that have been written against (Jackson) and given to me, she doesn’t need to work here in Brookhaven,” Cain said.

The tree lighting and other festivities planned by the Brookhaven-Lincoln County Chamber of Commerce have been postponed, according to Chamber... read more