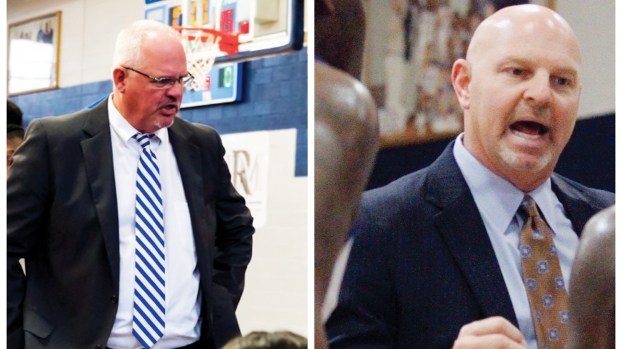 Photos by Co-Lin Sports Info Co-Lin basketball coaches Gwyn Young and Kenny Bizot are hopeful that in 2021 their teams will be able to hit the court to begin the season. Young is entering his 45th season in Wesson while Bizot has been leading the mens’ team for eight seasons.

Hall of fame Copiah-Lincoln women’s basketball coach Gwyn Young has almost seen it all in his 45 years as the lead Wolf in Wesson.

That was until the year 2020 came along.

“It’s been unlike anything I’ve ever experienced, that’s for sure,” said Young.

In a normal month of November, Young and his Lady Wolves would be five or six games into their regular season schedule and every night they weren’t playing, the coaching staff would be in gyms all across Mississippi and Louisiana looking for the next bunch of signees.

Not this year, though, as this season has yet to begin for Co-Lin and the other basketball teams of the Mississippi Association of Community Colleges Conference (MACCC).

In fact, Co-Lin students finished up on campus learning ahead of Thanksgiving and have all gone home for an extended holiday break.

The fall semester was filled with practices and scrimmages but no games for Young and CLCC men’s coach Kenny Bizot.

The MACCC says that basketball student-athletes can return to campus on Jan. 4. The first game scheduled for the Wolves is a Jan. 20 matchup at Coahoma C.C.

Like all things in the time of COVID-19, though, write those plans in pencil in case they have to be changed later.

“The plan has been for us to play a 21-game schedule,” said Young. “We’re supposed to play all the schools in the north once and then a home-and-home with the other teams in the south division. There’s talk though about that being adjusted though.”

The thought is the MACCC may decide to lessen the number of scheduled games while building in a period with no games on the calendar that can be used for any contests that need to be made up due to COVID-19 postponements.

So, with the players on campus from early August until late November, but with no games scheduled, what did the CLCC basketball teams do?

“It went surprisingly well,” said Bizot. “We did things a little different schedule wise than in the past, but it gave us plenty of time to teach and get better. We’ve got a team with 10 freshmen and that extra work was good for us.”

Last season was a rough one for Bizot and his assistant Jake Reed. The Wolves lost a lifetime’s worth of close games in their 23 game (7-16) season.

One of the biggest focuses of the last recruiting cycle was adding length and players that can go get the ball above the rim.

6-foot-3 guard Jordan Marshall of Raymond High is another rangy, athletic piece that was part of a state championship winning team in high school.

The MACCC allowed schools five scrimmage dates ahead of the season. Bizot said his team used three in the fall and saved two for after Christmas to use before the regular season began.

“Those scrimmage dates were really good for us,” said Bizot. “We played against some of the toughest teams in our league and it was a chance for the young guys to see how intense the competition is going to be when the season starts.”

With their teams off campus until 2021, Young and his assistant coaches — son Lane and former Lady Wolf Arnissayur Robinson — have plenty of time to recruit for the future.

That is, if they can find a high school game to watch.

“With some many high school games getting cancelled, you’ve got to make sure you call and triple check before you leave to make sure the one you’re going to is still on,” said Young. “We were able to bring some recruits in earlier in the year and show them the campus, but it’s hit or miss on if you’ll get to see them play right now.”

The MACCC has ruled that coaches can go watch recruits in person but can’t have face-to-face contact with them or their families. They are allowed to talk to high school coaches about their players, though.

Young and his team finished 13-11 last season and have four sophomores on their 13-player roster.

“In our scrimmages we tried some different stuff out offensively and were able to see what’s going to work with the group we’ve got,” said Young. “We were able to then come back and makes adjustments and have plenty of practice time to try and figure some stuff out.”

And yet after all these years he’s still a basketball junkie that loves creating a scouting report and a practice plan just as much as he likes the payoff of playing in a big game.

So now all he and Bizot can do is wait for the season and hope that things turn out better for them than the CLCC football program that only got to play three games this fall before COVID-19 cancelled the remainder of the season.

Monday night when he’d have been usually coaching a game against Mississippi Delta or Holmes C.C., Young was at his home in Wesson — flipping between the Mississippi State and North Carolina basketball games on ESPN.

Bizot has also spent his down time on weeknights to watch more basketball, but of a more personal variety.

He’d just got done watching his youngest son Will and the Wesson junior high team take on West Lincoln when he was reached by phone.

“With us usually playing on Monday and Thursday nights, I didn’t often get to see my oldest Kenner get to play when he was in junior high,” said Bizot. “This year I’ve been able to watch Will play a lot more at that age and for that I’m thankful. I think everyone is trying to make the best they can out of things right now — hopefully that means we’ll get to play some basketball next year.”

(AP) — It was like a scene from an action movie, except totally unscripted and genuinely life-threatening, involving a stunning... read more