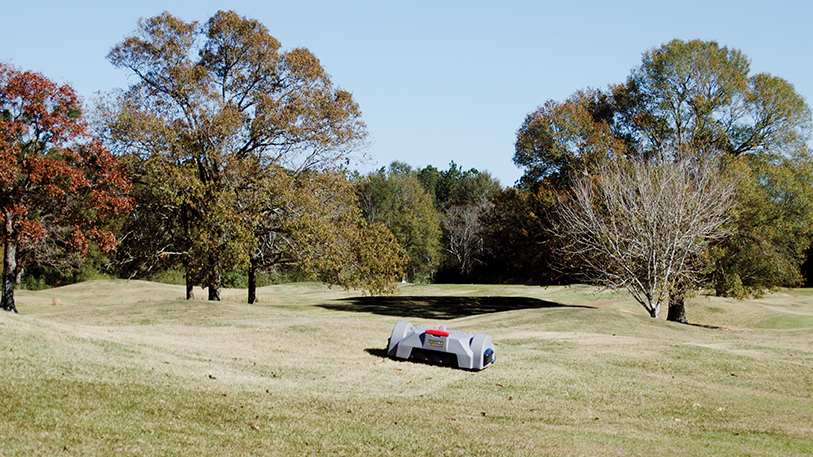 Photo by Gracie Byrne The Echo Robotics range picker traverses the golf course at The Club at Ole Brook Tuesday.

The Club at Ole Brook has gotten an upgrade in its outdoor technology.

The country club recently purchased two pieces of technology — a ball picker and a mower. These pieces of equipment are controlled by an application on General Manager Jeff Henning’s phone.

“These are the only two robots in Mississippi that we know of,” Henning said. “We’ve got two of them, and I can tell them to go to work whenever I need them to.”

The two pieces of equipment are stationed at the driving range. They were purchased from Echo Robotics in Illinois.

“A team came from Illinois and set everything up for us in two or three days,” Henning said.

There are wires buried at the driving range so that the robots have a boundary line. When they get too close to the boundary line, they turn around and go the opposite direction. The robots follow a grid in order to do their jobs.

The ball picker can hold 300 golf balls. Once it becomes full, it will return to its station and dump the balls and charge itself. Both robots have a six-hour battery life and take around two to three hours to fully charge.

“You could run them pretty much all day, but we don’t,” Henning said.

The staff has enjoyed having the robots so far.

“They took some tweaking at first, but we’ve had fun with them,” Henning said.

Club members have enjoyed seeing the robots on the golf course as well.

“All of the golfers are pretty intrigued by them. They think it’s pretty fascinating that the golf course here has a ball picker.”

The country club wanted to change their image and do something different.

“We wanted to change the golf experience itself,” Henning said. “It’s something neat for people to see when they come to the golf course.”

Henning hopes having the robots will elevate the club’s experience for their golfers.

“I hope it adds something to the golf experience, just something different,” Henning said. “We can truly say nobody else has one of these in Mississippi.”