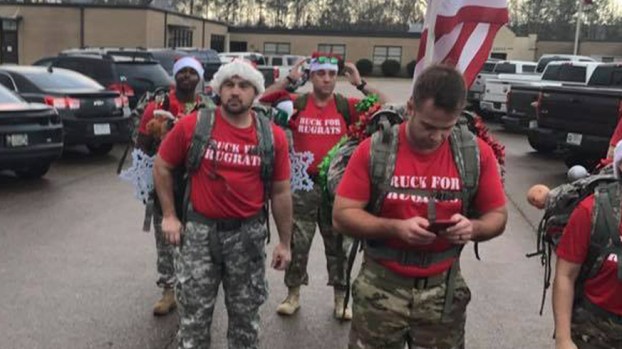 Photo submitted Participants prepare for the 2019 Ruck for Rugrats delivery of toys to Children's of Mississippi hospital.

Representatives of 5th Squad believe every child at Children’s Hospital of Mississippi deserves a toy this Christmas. That’s why the group will conduct a toy drive at Brookhaven Walmart Saturday from 8 a.m. until 6 p.m.

Toys brought or purchased for donation will be used to stuff a Lincoln County Sheriff’s Office truck, with the goal of filling the truck to capacity or beyond.

Peter Griffin of 5th Squad said any monetary donations given will be used to purchase big ticket items for the hospital’s play room.

“We bought some Nintendo Switches in 2019, and in 2018 we were able to buy two PlayStations and two X-Boxes, along with games and controllers for the children to use,” Griffin said.

The toy drive is the only event the organization conducts that does not directly impact veterans.

“We are all about helping Mississippi veterans in need with life-sustaining services,” said Griffin. “We pay rent, utilities, groceries. We even bought a bicycle this past year for a veteran because it was his primary mode of transportation.”

Toys donated will be transported to Jackson to be delivered Dec. 12 in 5th Squad’s Fifth Annual Ruck for Rugrats. The 4.5 mile fun walk is not a competitive ruck march, as many are, Griffin explained.

Marchers will gather at Jackson Preparatory School in Flowood on Lakeland Drive and make the walk to Children’s of Mississippi. Participants can bring a toy or carry one that has already been donated. A $10 fee is requested for those who have not already registered through the group’s website.

Any business that would like to help sponsor the toy drive or any veterans event can contact Griffin at peter@5thsquad.org or through the group’s Facebook page.

The Club at Ole Brook has gotten an upgrade in its outdoor technology. The country club recently purchased two pieces... read more