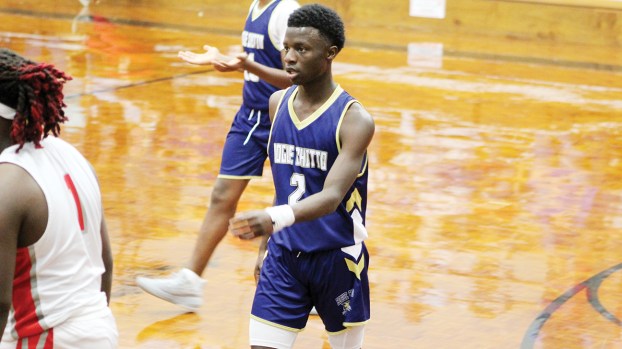 Junior guard Tae Nelson was a man on fire Friday for Bogue Chitto in a 66-46 win over Loyd Star in the Lincoln County Tournament.

Nelson knocked down nine 3-pointers on the night to score a game high 30 points for coach Robby Walters and the Bobcats (2-1).

When a shooter is feeling it, they’ll often come down and put one up outside their comfort zone in order to check just how hot their hand is.

Nelson’s heat check came in the third quarter at a time when Loyd Star had started to close what was a 30-16 BC lead at halftime.

Three straight 3-pointers by Nelson on three consecutive possessions had the Bogue Chitto faithful on their feet and LS head coach Seth Britt calling for a timeout as his team trailed 48-31.

The Hornets strung together some stops, did a better job of locating Nelson and used a man-to-man defense to pull within 48-38 with 5:47 remaining in the game after sophomore Julius Smith canned a 3-pointer for LS.

Freshman point guard Shoman Jenkins stepped up over those final five minutes to give BC some more breathing room. Jenkins twice drove to the basket for layups against the Hornet defense. He then showed his range to knock down a late 3-pointer that stopped the threat of any more Loyd Star momentum.

Jenkins finished with 14 for BC and possesses the ability to run the team while holding off his defender by putting his body between the defense and the ball.

“He moved here from Quitman and has been a real nice surprise in the way that he’s run the offense so far,” said Walters. “We started him last game for the first time and tonight he made some nice plays late.”

Earlier in the week Bogue Chitto had beaten West Lincoln 45-43 behind a 30-point outburst from senior Tra Mackabee. Against Loyd Star Mackabee came off the bench to score seven points.

This is the second season for Walters to coach the boys team. He took over after Marvin McGee led the program for one season.

The Bobcats started strong last year with a 4-2 record through their first month of play. The roster started to shrink though as Walters introduced discipline into the program.

Missing practice meant running extra and not all want to sign up for that.

BC lost 13 games in a row at one point before breaking that streak with a 61-59 win at Loyd Star on Jan. 21. The Bobcats routinely dressed out eight players last season for much of the latter part of the year.

Nelson, Cameron Williams, Jay May, Jax Leggett and Hunter Goebel are all returnees this season for BC.

Against Loyd Star Nelson, Williams and May started alongside senior Tristan Buffington. Buffington had played previously in his career and brings good size at nearly 6-foot-5 along with the physicality that comes from arriving fresh off the football field.

Jabari Gardner and Dre Quarrels round out the BC roster.

“I’m happy for the guys to get the win tonight,” said Walters. “They really shared the ball and played together. Tae is a guy who stuck with us last year when times were tough. Glad to see him have a night like he did tonight. Both Tristan and Jay were battling some injuries, but they toughed it out for us inside.”

The Bobcats also have a junior high boys’ team that’s having a successful season in its own right.

The Hornets finished 18-of-61 from the floor on the night.

Martin, Lawson Smith and Will McCullough are the only seniors on the Loyd Star roster for Britt.

Calcote is the only junior on the roster while the freshmen trio of Terrell, Caden Yarborough and Cayman Harveston round out the team.

Games scheduled for LS before the Christmas break include a home date with 4A Sumrall on Dec. 11 and a trip to face 6A Madison Central on Dec. 15. They’ll end the 2020 portion of their schedule on Dec. 17 with a home game against Pisgah.

BC is scheduled to host Mendenhall on Dec. 12 and Seminary on Dec. 15. Right now, the schedule has the Bobcats closing out their pre-Christmas schedule with a trip to West Marion on Dec. 17 and a game at Madison-St. Joe the following day.