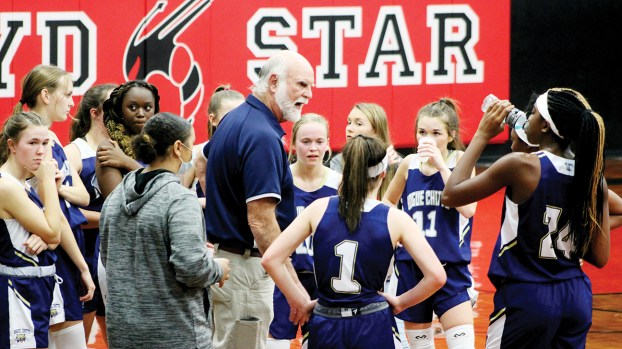 Photos by Cliff Furr Coach Robby Walters and his Bogue Chitto Lady Bobcats picked up their sixth win of the season Friday by beating Loyd Star in the Lincoln County Tournament.

The Bogue Chitto Lady Bobcats (6-1) bounced back from their first loss of the season earlier in the week to take a 37-29 win at Loyd Star (2-2) Friday.

Three days prior the Lady Bobcats dropped a 47-44 loss at home to West Lincoln.

Freshman center De’Mya Porter led the Lady Bobcats with 14 points in the win at Loyd Star.

The game and the one against West Lincoln were part of the revamped Lincoln County Tournament that saw each team playing twice instead of the traditional three games. Each school also got a chance to host a game as opposed to the tournament being hosted at one central location.

BC coach Robby Walters saw his team jump out to 10-5 first quarter lead and they were up 22-12 at half.

The Lady Hornets struggled to shoot the ball as they went 11-of-66 from the floor for an icy 17 percent on the night.

The long-limbed Porter can alter shots at the rim and on the perimeter the Lady Bobcats scramble well to guard the ball and harass the opposing ball handlers.

Porter has already had a 19-rebound game earlier this season.

Of the four Lincoln County schools, none have played more games this season than the Lady Bobcats.

Walter’s team has been lucky to have not dealt with any COVID-19 issues themselves. When that happens to their opponents, he works to find a replacement — a formula that’s worked well so far.

Bogue Chitto has played games this season against Perry Central, St. Joseph-Madison and Franklin County that originally weren’t on their schedule.

Walters feels that a season after losing some solid senior leaders in DeAnna Edwards, Katlynn Palmer and Kamilah Clay his team needs all the game action they can to gel and grow up together.

“We need to play as many games as we can to see what we need to work on,” said Walters. “If that means jumping on a bus to play at Perry Central on short notice, then that’s what we’ll do. Today we had Mount Olive tell us they couldn’t play next week, and we got with Wesson to play that night. I’ve been on the phone more this season than ever before.”

In his first two seasons Walters has won 20 games each year. Last season the Lady Cats were eliminated in the first round of the 2A playoffs by a Puckett team that made the state finals.

Last season Loyd Star was the second-place finisher in Region 7-2A with their only division losses to region champs West Lincoln.

Seth Britt is in his first season coaching the Loyd Star girls after being the head boys coach the last two seasons. He took over for both teams after coach Gene “Moochie” Britt returned to retirement after coaching the team last season.

Aubrey Britt led the team in scoring last season at 15.3 points per game as she earned Daily Leader All-Area honors.

The next four leading scorers graduate though as the Lady Hornets have several younger players stepping into larger roles this season.

Junior guard Tae Nelson was a man on fire Friday for Bogue Chitto in a 66-46 win over Loyd Star... read more