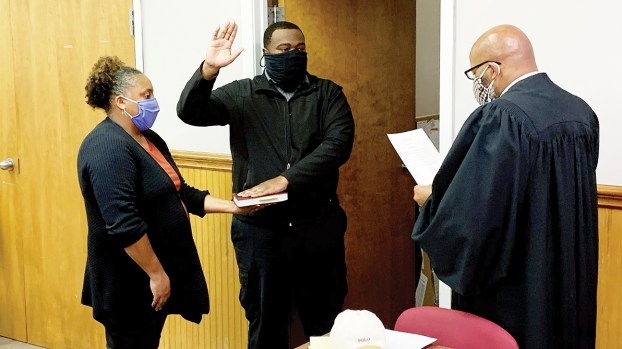 Just days before his 26th birthday, Reginald “Reggie” Cain was sworn in as the youngest police chief in Mississippi.

The Meadville resident, husband and father previously served with the Lincoln County Sheriff’s Office and has been a Brookhaven Police Department officer since 2016.

While Cain says he was honored to be chosen by the city’s leadership, it was not a position he expected or sought out.

Before former Bude Police Chief David Blackwell retired Nov. 20, he recommended Cain to Mayor Linda Green as his replacement. The day before Blackwell’s retirement went into effect, Mayor Green called Cain to see if he was interested in the position.

Others applied for the job, but the town’s board of aldermen accepted the recommendation of the mayor and former chief and hired Cain as Bude’s new chief of police, making him not only the youngest chief in the state but also the town’s first Black police chief.

Cain said he knew the people of Franklin County appreciated him when he came in a close second in the 2019 Democrat Party primary for county sheriff. But he faces several challenges with the job, he said.

“The county as a whole is behind the times. Some people are still living ‘back in the day,’” Cain said. “Franklin County has a lot of racism and I see a lot in the younger generation, in my age group.”

Relationships are not the only challenge. Cain said the police department needs to catch up in a couple of areas, specifically.

On his first day as chief, Cain said he pulled outstanding warrants from the files and served a few of them. Mayor Green called him to commend him for already “getting the job done.”

Bude’s police force is mostly part-time, Cain said, but several officers from other agencies have contacted him already about the possibility of working with him.

For now, Cain said he plans to stay with Brookhaven’s law enforcement, as well.

“I turned down a lot of offers since being at BPD because I wanted to stay in Brookhaven to help the community,” he said — offers from state agencies, Alcoholic Beverage Control and the Mississippi Bureau of Narcotics.

Cain is also putting out calls for toy donations, hoping to help impoverished families at Christmas. He wants the public to know he’s serious about his job and cares about the communities he serves.

He also wants to make sure everything starts off on the right foot.

“I want to start with a clean slate.”

The Walgreens Drugstore on Brookway Boulevard closed its doors temporarily Tuesday morning, causing residents to wonder if the store was... read more