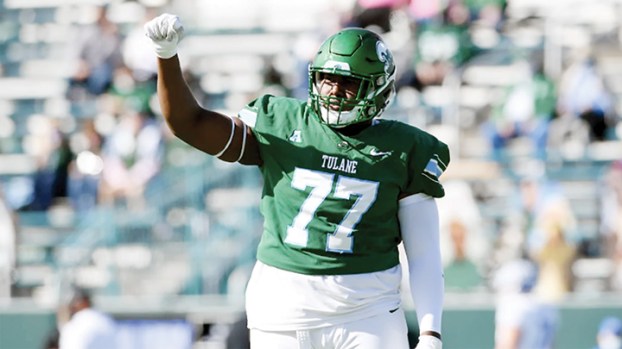 Photo by Tulane Sports Info Brookhaven High product Jeffery Johnson finished with six tackles Tuesday for Tulane in a 38-27 loss to Nevada in the Famous Idaho Potato Bowl. A defensive lineman, Johnson had career highs in every major statistical category in 2020.

Johnson was third on the team with six tackles including four solo stops against Nevada. An All-State player at BHS while playing for then coach Tommy Clopton, Johnson has had his best statistical season of his career in 2020.

The 6-foot-3, 330-pound Johnson finishes the year with 33 tackles including six tackles for a loss — both career highs. He also set a career mark with 3.5 sacks and recovered two fumbles.

One of those fumbles provided the highlight of the season for Johnson as he picked up a loose ball and took it in for a 1-yard score against Houston on Oct. 8.

It was the third consecutive bowl berth for Tulane and head coach Willie Fritz as the Green Wave finished with a regular season winning record for the first time since 2013.