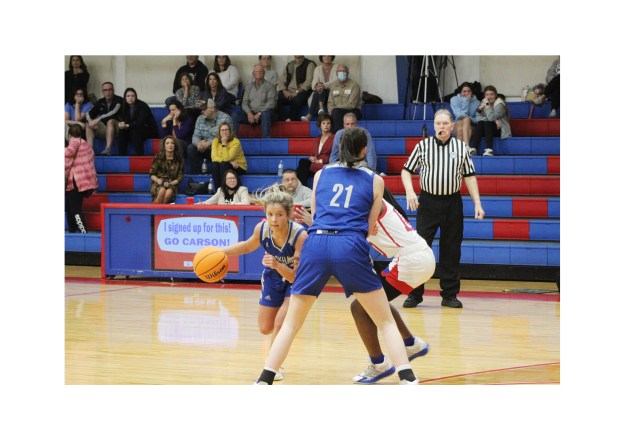 The Brookhaven Academy Lady Cougars (15-4) were dominate in every phase of the game Monday afternoon as they pounded Warren Central (1-9) in the Copiah Academy Tournament by a 60-21 final score.

A short-corner jumper by sophomore forward Lillie Gates just before the halftime horn gave BA a 38-7 lead at the break.

That basket was a good example of the kind of day it was for Brookhaven as a missed Warren Central shot led to a long pass down court and then another pass in close to a waiting Gates who’d positioned herself near the basket.

Head coach Ron Kessler and assistant coach Hugh Webb had planned for their Lady Cougars to push the ball in transition to the forwards and hoped to get Warren Central junior center Zy’Kerri Segrest into early foul trouble.

Both of those things happened as the BA defense torched the MHSAA 6A Lady Vikings in transition and Segrest missed much of the first half with two early fouls.

“We’d watched plenty of tape on them and seen some games where Segrest really taken over offensively,” said Kessler. “Our post players did a great job of running the court and our guards moved the ball up the court to get us some baskets in close. Really proud of how the girls executed the game plan.”

Gates finished with a game high 20 points while also pulling down five rebounds. She was 7-of-11 from the floor and 6-of-9 from the free throw line.

It’s nearly the same roster from last season with guards MaKayla Martin and Allison Covington as the only seniors on the team.

Last year in his first season at the school Kessler led the Lady Cougars to a 25-13 record. BA plays in the 4A classification of the MAIS and when the postseason begins teams like defending state champion Hartfield Academy (12-4), Simpson Academy (10-2) and Pillow Academy (10-3) will be the competition the Lady Cougars expect to face.

Kessler wanted a more challenging regulars season schedule this season to prepare his team for when the pressure ratchets up in the playoffs and so far, he’s been able to see the benefits.

“We’ll play Jackson Prep and Hartfield later in this tournament and then we’ll play Prep against on Saturday and Simpson on Monday at home,” said Kessler. “Those are the type of games we’ve got to use to get us ready for the postseason basketball. Good competition only makes you better.”

Warren was the only other Lady Cougar in double figures as she scored 10 points and pulled down eight rebounds. Junior Abby Grace Richardson came off the bench to add nine points.

Every Lady Cougar on the roster saw action as 10 different players scored for BA.

The only losses so far this season for the Lady Cougars were an early season setback to Hartfield, a loss to defending 2A state champion Centreville Academy, a road loss at Bowling Green School and a four-point defeat to Jackson Academy (16-1).

BA is unbeaten (9-0) on their home court of John R. Gray Gymnasium this season. Division play begins on Friday, Jan. 8 when Oak Forest Academy visits Brookhaven for the District 4-4A opener.

“Last year in our first game after Christmas we trailed 3-0 (a 30-16 loss to Jackson Prep) going into the second quarter,” said Kessler. “Today it felt good to top that in our first two trips and look sharp after coming off a little break.”

NEW ORLEANS (AP) — Alvin Kamara expects a fine for wearing a pair of Christmas-themed shoes that, as it turned... read more