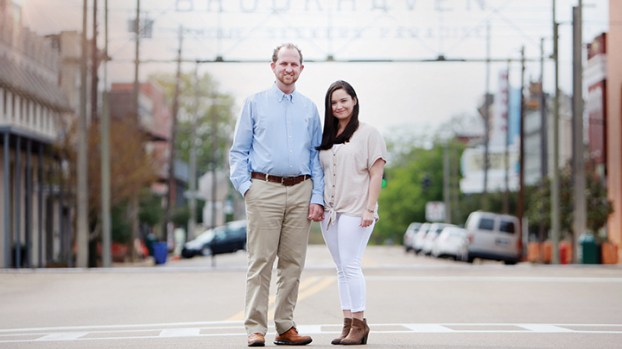 Photo submitted Jason Snider, pictured with his wife Abbi, has served on the Brookhaven Board of Aldermen since 2017, representing Ward 4. Along with Alderwoman-at-Large Karen Sullivan, who recently announced her retirement, Snider has announced he will not be seeking reelection in the 2021 municipal elections.

Qualifying for this year’s municipal elections begins Monday and soon voters will know who’s throwing their hats in the ring for mayor, city alderman or chief of police.

Ward 4 Alderman Jason Snider announced via Facebook he would not seek reelection to the Board of Aldermen post he’s held since 2017.

“It has been an honor and a privilege to serve as an alderman for the City of Brookhaven. The opportunity to serve the people of Ward 4 and our city is something that my wife, Abbi, and I will never forget,” Snider wrote. “With Abbi starting her medical residency in July, we made the very difficult decision to not seek re-election. It will soon be time for another conservative citizen to represent us.”

Snider said he will truly miss serving the city.

“I believe that Brookhaven’s greatest days are yet to come, and we hope to return one day to see them,” he wrote.

Alderwoman-at-large Karen Sullivan announced in early December that she was retiring after serving on the city’s board since 2009.

Ward 1 Alderman Dorsey Cameron, Ward 2 Alderman Shannon Moore and Ward 6 Alderwoman Shelley Harrigill were elected to their first terms on the board in 2017.

Ward 5 Alderman Fletcher Grice was elected to the board in 2013 and ran unopposed in 2017.

Ward 3 Alderwoman Mary Wilson has served on the board since winning a 2004 special election to fill the unexpired seat of her husband, the Rev. Jerry Wilson, who was elected to the Lincoln County Board of Supervisors.

Mayor Joe Cox is Brookhaven’s 30th mayor and has served since he was elected in 2013.

Chief Kenneth Collins was elected chief of the Brookhaven Police Department in 2017.

Individuals who desire to run for one of these offices can submit their statement of intent at the Brookhaven City Clerk’s office beginning at 8 a.m. Monday. The deadline to submit is 5 p.m., Feb. 5.

A new law requires candidates to have lived as a resident within the city limits for at least two years prior to the election.

There is a $10 fee per candidate, and all forms are available at the website of Circuit Clerk Dustin Bairfield, www.dustinbairfield.com.

Residents at least 18 years old can register to vote in the municipal election up to 30 days prior of the election. That can be done in the Lincoln County Circuit Clerk’s office during business hours, Monday through Friday from 8 a.m. to 5 p.m.

Voter IDs can be obtained at the circuit clerk’s office.

Fire fighters with Brookhaven Fire Department Station 2 responded at 7:34 a.m. Thursday to a call of smoke in the... read more