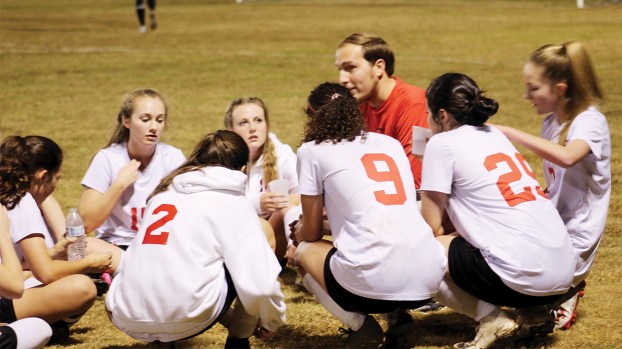 Photo by Katie Furr The Loyd Star girls’ soccer team and coach Jordan Lea will face Wesson in a must-win match Thursday as the victor will lock up the No. 2 seed ahead of the MHSAA soccer playoffs beginning next week.

Soccer season is in its final week of regular season play for local MHSAA schools as the postseason draws nigh.

In Region 7-Class I (1A/2A/3A) standings, Franklin County has claimed first place in both the boys’ and girls’ divisions ahead of the regular season ending this week.

First and second place teams make the postseason from each group with the top seed hosting an opening round playoff game and the No. 2 seed going on the road in the first round.

The game of most importance on the girls’ side is Loyd Star facing Wesson Thursday in Copiah County.

Loyd Star is 13-3 under first year coach Jordan Lea with a 1-0 loss to West Lincoln, a 4-0 defeat to Franklin County and a 1-1 OT loss to Wesson as the only blemishes on their record.

Wesson and coach John “Bobo” Douglas are 7-7 overall and 5-3 in division as of press time, while LS has a 6-2 region mark coming into the final week of play.

Sophomore Mary Claire McCurley is the engine that drives the Loyd Star offense as she’s put together 31 goals in 16 games this season to lead the Lady Hornets. McCurley has also dished out a team-high 10 assists in 2020-2021.

Sophomore Alli Ferguson is second on the team with 17 goals and freshman Abby Burnette has chipped in 16 goals as well for Lea’s squad.

Douglas is trying to get Wesson back to the playoffs for a second straight season. Sophomore striker Marley Channell leads the Lady Cobra offense.

Monday night the Bogue Chitto Bobcats boys moved closer to history by nearing their first playoff berth since the program began in 2017 with a 5-2 victory over West Lincoln.

Coach Shane Nippe and his Bogue Chitto team are 8-3 overall with a match Thursday against Hazlehurst remaining on the schedule. BC won 8-1 over Hazlehurst when the schools met earlier in the season.

In the win over WL, the Bobcats got two goals and an assist from junior Yosvin Hernandez and two goals from sophomore Enrique Hernandez.

Eighth grader Yojan Hernandez also chipped in an assist as well. Yozvin and Yojan Herandez are brothers, while Enrique is their cousin.

Junior Carson Price also added a goal for BC in the win.

“Carson had a perfectly placed ball from near midfield on his goal,” said Nippe. “The guys had good communication, great passing and excellent dribbling to get penetration which created our scoring opportunities.”

BC will need to beat Hazlehurst and have the Loyd Star boys lose one of their matches this week against Franklin County or Wesson to secure second place in the division.

Eleven up and 11 down thus far in the season for coach Brooks Smith and his West Lincoln girls’ basketball... read more