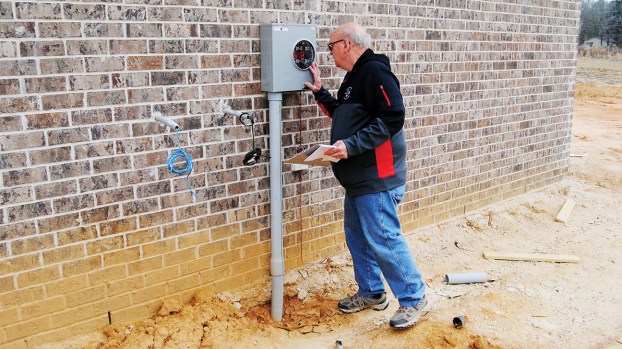 Photo by Brett Campbell / Brookhaven Building Inspector David Fearn inspects wiring and a meter box at Mill Creek subdivision to insure it is ready to receive a power meter.

The Mill Creek subdivision project is making progress toward its goal to be completed in spring.

Brookhaven Building Inspector David Fearn made electrical meter inspections Wednesday on 15 of the South First Street subdivision’s 48 homes. Fearn insured that meters were ready to be installed by Entergy workers, placing a green sticker with handwritten notations on meter boxes he cleared.

“I made inspections on every step of construction as the houses were going up,” Fearn said. “Today, we’re making sure homes with completed wiring are ready to have a power meter installed.”

A walk through the loop-shaped street of the subdivision reveals structures in various states of completion. Carpenters cut molding and baseboards for one house as other workers made measurements or carried materials inside other houses.

A crew used shovels to level out dirt for a concrete sidewalk to be extended in front of more houses, and another man removed wooden forms around a concrete driveway that had fully set.

“The houses are looking really good,” Fearn said, walking through one of the houses and pointing out where the water heater and air conditioning return unit would be placed.

The houses still need appliances, though, he said, and shipping restrictions on imports had slowed down that process over the past few months, he said.

Brookhaven’s Board of Aldermen approved the private development from Southport Financial in June 2019. A total of 48 homes on 15 acres just north of Dale Trail NE on South First Street were to be built “in an area of Brookhaven that is ripe for new growth,” according to Scott Seckinger of Southport.

Winters Construction has acted as general contractor for the project, at an estimated cost of $9.6 million.

Mill Creek’s building progress was not significantly affected by COVID-related shutdowns and restrictions.

“The developers are planning to install some solar-powered street lights, which they’ll maintain,” Fearn said. “The street will probably be ready for the city to approve and sign off on in mid-April, I’m thinking.”

Two murder suspects have been captured in Lawrence County after a search Tuesday by law enforcement and will make their... read more