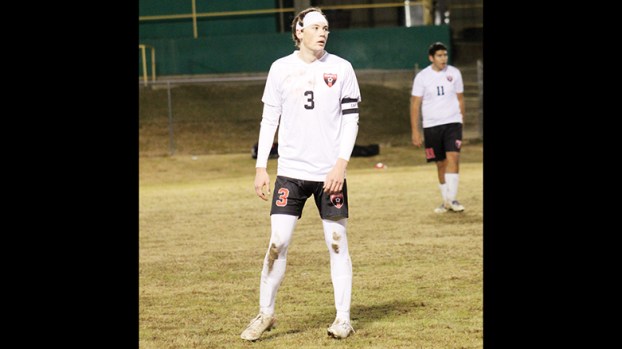 Photo by Katie Furr Loyd Star junior Brantley Walker and the Hornets ended their 2020-2021 soccer season Thursday with a 2-1 win over Wesson. MHSAA soccer playoff action begins next week with Franklin County hosting a pair of matches and the Bogue Chitto boys and Wesson girls traveling for the first round.

Hornets wrap up soccer season with split against Wesson

Regular season soccer wrapped Thursday in a deluge for Loyd Star as the Hornets took on the Wesson Cobras in a pair of important Region 7-Class I matches.

The boy’s match saw Loyd Star get one goal each from the senior duo of Eric Birch and Luis Benavidez in a 2-1 victory.

“I’m so proud of the guys for what they were able to accomplish this season,” said Lea. “Getting ten wins in the season was no easy task and they earned it. They have a lot to be proud of and nothing to be ashamed of.”

Sam Kirton scored the lone goal for Wesson in the loss.

When MHSAA Class I playoff action begins next week Franklin County will host a home match as the No. 1 seed on the Region 7 boy’s side of the table.

Bogue Chitto will travel as the no. 2 seed for an opening round match next week. The playoff appearance is the first in BC program history.

On the girls’ side of playoff action, it will also be Franklin County hosting a match as the No. 1 seed.

Who would take that second spot came down to the Wesson and Loyd Star finale Thursday night in Copiah County.

Wesson coach John “Bobo” Douglas saw his team get a goal from Marley Channell and a goal from Lexie Guess in a 2-0 win that put the Lady Cobras into the postseason for a second straight season.

The Lady Cobras improved to 8-7 with the victory while Loyd Star finishes with a 13-5 record.

“Despite the loss, these girls were able to prove a lot of people wrong,” said Lea of his girls’ team. “They broke many school records, came together as a team and left the field as a family — I can’t ask for much more than that.”