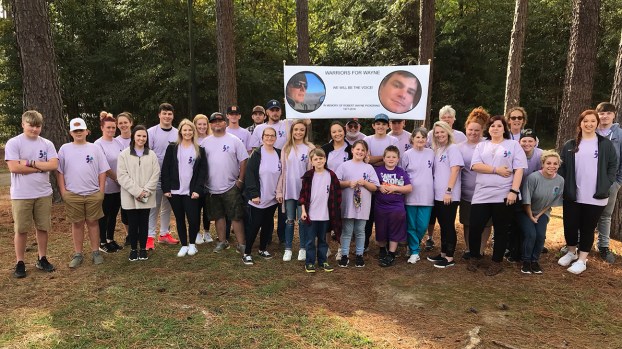 Photo submitted Brenda Townsend, in turquoise pants, helped organize the “Warriors for Wayne” walk in Brookhaven to honor her son’s memory and raise awareness of suicide. More than two dozen people participated in the walk in Brookhaven City Park.

“He was a loving father, son, brother and friend to all,” said his mother, Brenda Townsend. “He was a bright light to this world.”

In Wayne’s honor and memory, his aunt Erica Leggett and his mother formed the team “Warriors for Wayne” to raise awareness of suicide and in hopes of making a difference in the lives of others. The team joined the American Foundation of Suicide Prevention in 2017 and participated in its first “Out of the Darkness Walk” that year in Madison. The team continued the walks each year alongside many others affected by mental illness and suicide.

Due to the COVID pandemic in 2020, the walk in Madison was canceled, but many teams from all around the world still participated virtually.

Townsend took the opportunity to move her team’s walk to her hometown of Brookhaven. More than two dozen people participated in the recent 5K walk in Brookhaven City Park.

For each walk, the Warriors team has worn a specially-designed t shirt — created with the help of a local printing company — in order to help raise funds for AFSA. The 2020 design and focus was “You Matter.”

“We want to be the voice and let everyone know that they matter,” Townsend said. “Our goal is to grow more in 2021 and to have more walks to help make a difference.”

Townsend said no one close to her son Wayne believed he would have taken his own life.

“Wayne was a very bright student. He graduated in 1996 with a scholarship … but took a break and went into the oil field industry,” Townsend said. “He had no problems.”

But Wayne was working with Townsend’s brother under his tutelage, and in 1998 her brother was killed during a break from work. Townsend believes his death triggered some type of trauma in her son that eventually led to him giving up hope.

“But he was very spiritual. He was a very inspirational person, a light to many,” she said.

Townsend wanted to be a light to others who may be struggling and believe they do not matter to anyone.

The team was named ‘Warriors for Wayne’ because “he was a warrior. He fought a lot of battles and he had a strong faith in God,” Townsend said.

“If you or anyone you know is struggling or has been affected in any way, please reach out for help,” Townsend said. “You are not alone and you matter.”

Nearly 450,000 COVID-19 vaccines have been distributed across Mississippi so far, according to the Mississippi State Department of Health. Of... read more