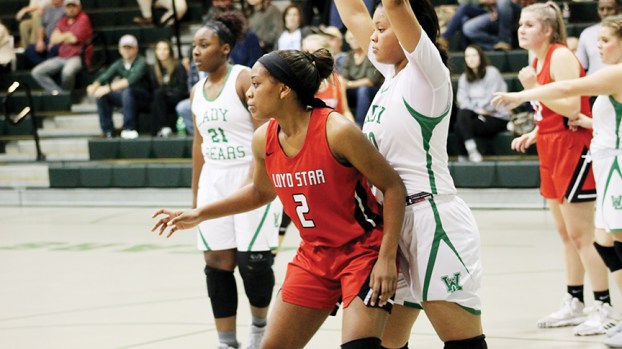 Photo by Katie Furr Loyd Star senior Calia Beard and West Lincoln sophomore Ta’kyla Brothern won’t see their teams play again in the regular season, but another matchup between the schools is a possibility when the postseason begins on Feb. 9 with the Region 7-2A tournament.

Just over a week remains in the MHSAA basketball regular season as the area Region 7-2A race builds towards the division tournament that will be hosted by Bogue Chitto.
The six-team region has been reduced by one this season as Amite County chose to cancel the rest of their hoops season due to COVID-19.
The girls’ side of the region standings is ruled by the unbeaten (14-0) West Lincoln Lady Bears.

The Lady Bears are on track to win the regular season region title for a fourth straight year as they were perfect in division play last season as well.

The closest calls this season for West Lincoln were a 67-53 overtime win over Loyd Star and a 57-50 win at Bogue Chitto.

The battle for second place between Loyd Star (10-5) and Bogue Chitto (11-5) is the seeding race that is still left to be resolved.

Bogue Chitto and LS meet in the regular season finale on Thursday, Feb. 4 at Loyd Star. The pair will then most likely meet again in the tournament semifinals the following week.
The top two seeds from the region tournament will host MHSAA first round playoff games the following week while the No. 3 and No. 4 seeded teams will play on the road in the opening round.

Wesson (5-7) currently sits in fourth place while Enterprise (3-9) is the fifth-place team.

The boys’ side of region hoops is much wider open with the subtraction of Amite County from the equation.
Amite County finished unbeaten last year in division play with Wesson coming in as runners-up.

After starting the season 0-5, coach Seth Britt’s Loyd Star boys’ team has jumped to the front of the division standings with a 5-1 region record. The Hornets (7-8) picked up a big win 57-45 over Wesson in their region opener.

Since then, LS has pulled out close wins over Bogue Chitto (48-42) and Enterprise (39-35 0T) before losing their first region game of the season Tuesday (39-26 at Enterprise).

Enterprise (7-5) is currently the third-place team in the region while Bogue Chitto (4-7) and West Lincoln (1-13) round out the boy’s standings.

The Region 7-2A tournament at Bogue Chitto will begin on Friday, Feb. 5, with the opening round games between the No. 4 and No. 5 seeds for both the boys’ and girls’ brackets.

Tournament play will be stretched over the course of the next week to allow for smaller crowds each night.

The girls’ semifinals will be played on Monday, Feb. 8 and the boys’ semifinal matchups will take place on Tuesday, Feb. 9.

The consolation games will be played on Thursday, Feb. 11, with the tournament finals taking place on Friday, Feb. 12.

Basketball was finally back in Mullen Gymnasium on the campus of Copiah-Lincoln Community College in Wesson Thursday as the Co-Lin... read more