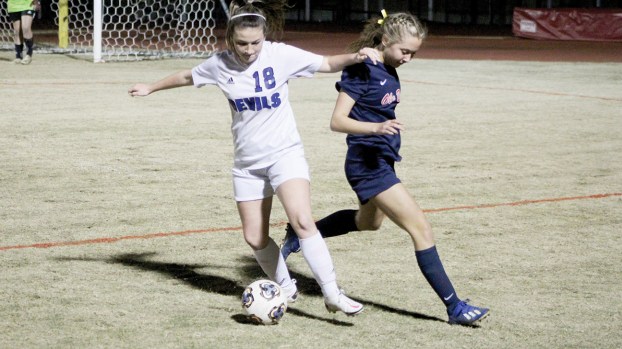 The opening round of the MHSAA soccer playoffs featured four local teams playing in the postseason. Here’s a look at how each school fared Tuesday night.

After winning Region 5-5A the Lady Panthers (9-4-1) earned the right to host their playoff opener against Pearl River Central.

The Blue Devils from Carriere had a strong offensive attack led by two early goals from senior Anna Grace Atwood as they led 3-0 at halftime on the way to the 5-0 victory.

For Ole Brook first-year coach Dustin Bairfield, his team only loses three seniors to graduation in Lydia Torres, and the duo of captains Morgan Moak and Taylor Levy. With so much of his roster returning, Bairfield has high expectations for the program in the coming years.

“We’re losing some great assets to our team in our trio of seniors,” said Bairfield. “We’re looking forward to an even better season next year. This season has been a memorable one dealing with quarantines and such. I can say that the rewards far outweighed the obstacles faced though.”

No team in the area got closer to pulling out a win Tuesday than Wesson as they traveled to Rankin County to face McLaurin.

WAC head coach Bobo Douglas saw his team leading 2-1 at halftime before the Tigers mounted a comeback to win 3-2.

The Cobras (9-8) got a goal each from sophomore Marley Channell and senior Chloee McManus.

“We had a couple mistakes that cost us in the second half,” said Douglas. “The girls played hard until the final whistle. We have three seniors this year (McManus, Avery Kyle and Ella Silvan) after having a big senior class last season. Very proud of the leadership from those three and their contributions to our program.”

The playoff appearance was the second straight for the team.

“We’ll definitely miss those seniors next year,” said Douglas. “We had a lot of youth playing this season and we’ll return eight out of our 11 starters so we’re looking to build off this year’s success into next season.”

Franklin County (19-1-1) finished ahead of Wesson in the Region 7-Class I standings. The Bulldogs beat Crystal Springs 12-0 in their playoff opener and will host Clarkdale for a second-round matchup Saturday.

After finishing as region runners-up to Forest Hill, coach Aaron Ayers and his Panthers took to the road and traveled to Harrison County to face Long Beach High.

“Very proud of the seniors and how our team continued to fight until the very end,” said Ayers. “Those seniors have shown the younger guys the way forward and how they needed to play the game.”

With such a large group of younger players gaining experience this season, Ayers also used his time after the playoff loss to talk about what the Panthers needed to improve in going forward.

“The loss of this group of seniors will be huge and we’ll need some of those younger guys to step up into leadership roles,” said Ayers. “It starts with off-season conditioning and getting touches on the ball as many days as you can to improve and prepare for next season. The experience that our younger guys have gained these past two years will help us greatly.”

Magee jumped out to a 3-0 halftime lead before a pair of second half goals by Bogue Chitto provided the 4-2 final score in their Class I first round matchup.

The Bobcats (9-4) and coach Shane Nippe were making their first postseason appearance in program history after finishing runners-up in Region 7.

Andrew Merrell scored to put the Bobcats on the board via an assist from Yosvin Hernandez. Hernandez then scored later on a free kick for the final BC goal of the night.

DeMarcus Porter, Andy Waller and captain Isaac Cutrer are the only three seniors on the roster for Nippe this season.

“We’ve got a solid group of guys coming back next year for sure,” said Nippe. “We hope to make another run at the playoffs next season.”
Region 7 champs Franklin County (19-2-1) beat McLaurin 4-1 in their playoff opener and will host Clarkdale for a second-round match Saturday in Meadville.