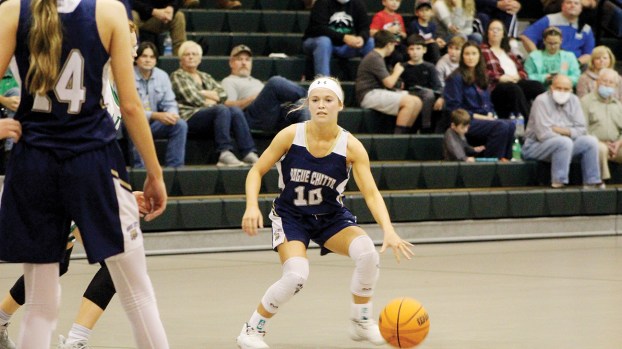 Photo by Cliff Furr Bogue Chitto senior point guard Kayci Beth Wallace and the Lady Bobcats are scheduled to close out the regular season on Thursday, Feb. 4, at Loyd Star. The Region 7-2A Tournament is then scheduled to start the next day and run through the following week.

That’s what happened on the court, but it’s what’s happening off the court that’s having the biggest effect on basketball within the county right now.

West Lincoln has shut down its basketball program until Feb. 6 due to a rise in COVID-19 cases at the school.

The Bears had been scheduled to play Wesson on Friday, Jan. 29, and Enterprise on Tuesday, Feb. 2.

The Region 7-2A tournament is scheduled as of now to begin on Friday, Feb. 5, with a pair of games between the No. 4 seed and No. 5 seed on the boys’ and girls’ sides of the bracket.

The West Lincoln boys’ team had been on track to play in that 4/5 game.

The MHSAA is letting each region decide whether or not to play a tournament this season. Some regions have chosen to skip the tournament and seed their teams ahead of the state tournament based on regular season records.

The Region 7-2A plan was to stretch the tournament over a full week and play fewer games on each day. The most recent schedule had the No. 4 versus No. 5 games on Feb. 5, the girls’ semifinals on Monday, Feb. 8, and the boys’ semifinals on Tuesday, Feb. 9.

The consolation games would then take place on Thursday, Feb. 11, with the two championship games being played on Friday, Feb. 12.

In the past, all four semifinal games would take place on a single day as would the consolation and championship games. Bogue Chitto is scheduled to host the tournament.

The opening girls’ game was a typical tight matchup between West Lincoln (14-0) and Bogue Chitto (11-5) Tuesday.

West Lincoln led 23-19 at halftime, but the Bobcats came out in the second half and took a five-point lead midway through the third quarter and led 34-32 heading into the fourth quarter.

BC went cold from the floor in the final eight minutes as they only managed two points in the fourth quarter.

Back-to-back baskets in the fourth quarter by sophomore point guard Kara Beth Addison gave West Lincoln the lead back for the final time.

“When we played aggressive in the second and fourth quarters — we looked good,” said Smith. “We didn’t play a complete game for sure, but we made the plays we needed to win. My message to them afterwards was we can’t just wait until the end to turn it on.”

Ken May led the BC offense in their win with 15 points. Tra Mackabee added 11 points and Jay May scored 10 points for the Bobcats (4-7).

EAC was led by Natalie Harris with 11 points.

The boys’ game was a big one in regard to region standings as the 39-26 win by Enterprise (7-5) gave Loyd Star (7-8) their first region loss of the season.

“I thought our defense was the key to help controlling the pace for us,” said Enterprise head coach Shane Adams. “We haven’t shot the ball recently as well as we did the first part of this season, so our defense has been even more important. Our kids gave a great effort, Loyd Star has a good team and we’re just thankful to get the win.”