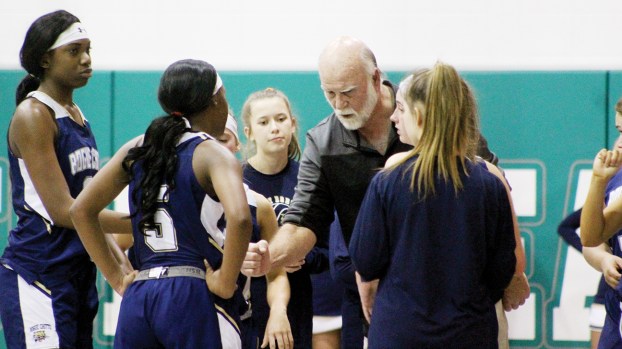 Photo by Cliff Furr Bogue Chitto coach Robby Walters breaks down a huddle with his team earlier this season. One can learn alot about a basketball team by watching the energy coming from their bench during a game.

Watch the bench to see the difference

When at a high school basketball game, I often find myself watching the bench.

Are the players not in the game locked into the action on the court or are they staring into the bleachers?

When the coach calls a timeout, do they huddle around him or are there players sitting apart from everyone else in the huddle?

Is there energy coming from the substitutes when their team makes big plays?

Off all the major sports, basketball is the most performative. In its early days, the game was played on a stage. It’s still played on one at Piney Woods School in rural Rankin County.

You can’t always see what’s going on inside a dugout between a baseball team and a football huddle during a timeout is filled with players in pads and helmets surrounding their coaches.

It’s all out in the open on a basketball court and you can usually gauge the health of a team based on the way their bench interacts with the game.

Waving a towel, shouting encouragement to teammates and being a positive presence on the bench isn’t just the job of the players who are further down the depth chart.

Crowder has been in the NBA for almost 10 years now. When he was a high school player in Georgia, he was a late bloomer who played both basketball and football.

After highs school he played basketball as a freshman at a Georgia junior college.

His coach at Howard was a friend of Buzz Williams — the current Texas A&M coach who was at Marquette at that time.

Williams flew in to see Crowder one night, but foul trouble kept him on the bench for much of that game.

Afterwards his junior college coach approached Williams to apologize for the minimal minutes that Crowder was on the floor and to make a case for how good of a player he was despite his limited output.

Williams replied that he didn’t need to be talked into offering Crowder a scholarship — he was ready to do so immediately.

The way Crowder cheered for his teammates that were on the court, the way he didn’t sulk after he went to the bench with fouls, the way he waved a towel and locked into what his coaches were saying in the huddle — that’s what sold Williams on Crowder.

The talent and skill were apparent from just a couple minutes on the court. The way he acted on the bench is what told his future coach he was special.

It’s no surprise that since entering the league in 2012 Crowder has been labeled a “glue guy” who’s often traded for or signed by teams that are looking for veteran leadership in their locker room.

It feels like in 2021 that good energy from your bench is going to be more important than ever as we move towards the postseason that will soon begin with region tournaments and then the state tournaments put on by the MAIS and MHSAA.

Crowd sizes are going to be limited and teams won’t be able to count on that rush that comes from playing in a packed gym to get them going.

They’ll need to create their own energy.

I experienced what that’s like during my time as an assistant coach at Co-Lin.

In 2010 and 2011 our women’s team made it to the NJCAA National Tournament in Salina, Kansas.

The first night of the tournament had some decent crowds, but the event was double elimination and as the week wore on, you could find yourself playing a game on a weekday afternoon in an arena that lacked juice.

Ultimately, it was up to your team to create its own atmosphere. To fire each other up and feed off their shared energy.

Those two teams were special — finishing No. 7 in the country one season and no. 6 the next. The second team had every starter sign with an NCAA Division I school after the season was over.

What set them apart was their cohesiveness.

Ball on the floor and someone dives for it — everyone on the bench jumps up to cheer. Sub goes in to get as starter out — they jogged past each other and slapped hands as they passed. Our head coach Gwyn Young sat down in a huddle to diagram a play on his board — the team would fold in around him to see what the plan was.

Talent will get you only so far. A true team is hard to stop.

That’s been on my mind as I’ve watched the regular season wane over the last few weeks. I love to see the freshman who only gets in late in the game jump up and shout when their teammates make a great play.

It’s always great to see that and then see the roles reversed late in the fourth quarter when a younger player hits a shot to the cheers of the starters who are now on the bench.

That’s another key word when you’re talking about the health of a team — roles.

A role is a part that you play. Some are born to play the role of teammate with everything they have while others may resist it.

I won’t single them out here by name, but there’s a senior guard in our area that is in their first year starting.

When they were a sophomore on a very good team, they only got in the game late — when the outcome had been decided.

As a junior their minutes increased, and they averaged a few points a game for another good team.

This season as a first-year starter they’re again part of a very good basketball team.

They’re averaging more point and minutes than they ever have before. They are active on defense, hit the open shots that come their way and hustle every time they’re on the court.

Their team is deep though and there are some nights where a sophomore with a hot hand comes in and eats up some of their opportunities in the second half.

And it’s probably not a coincidence that the younger players on that team are a consistent encouragement to their team.

When they see one of their senior leaders being a good teammate, it just naturally rubs off on them.

That’s the best thing about being a good teammate, actually. It doesn’t require a lick of talent and it only makes your team better.

Want to see what that looks like in action — pick a team with a great record in our area and watch the bench.