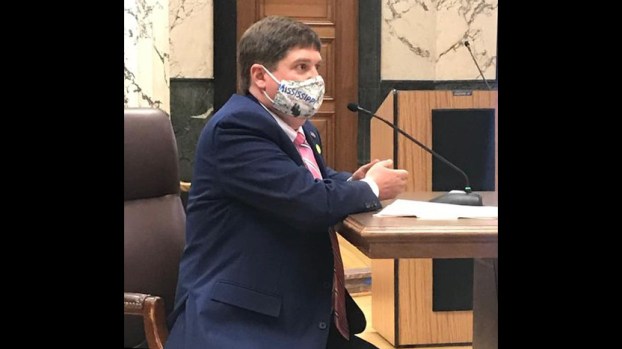 Photo submitted / Sen. Jeremy England (R-D51) authored SB2746, which emerged from the Senate Committee on Public Health and Welfare as written, and will be presented by England in the Senate chamber in the coming days.

Bill dies in House committee, advances as is in Senate

Three-year-old Hudson Hartman, a.k.a. Sen. Hudson, is the smiling face of Mississippi Senate Bill 2746, which survived its consideration in Senate committee.

Its companion bill in the House — HB1004 — died in committee.

Hudson, an energetic blonde child with Down syndrome, is the son of US Air Force Lt. Col. CJ Hartman and Mika Hartman. Lt. Col. Hartman is a native of Loyd Star.

The Senate bill would require healthcare practitioners to provide information to pregnant women who receive positive tests for any trisomy condition — a chromosomal condition characterized by an additional chromosome. The most common forms of trisomy are Down, Edward and Patau syndromes. The law would also require the Mississippi State Department of Health to provide the information to healthcare practitioners and publish it on MSDH’s website.

SB2746, sponsored by Republican Sen. Jeremy England, was introduced Jan. 18 and referred the same day to the Senate’s Committee on Public Health and Welfare. The committee had until the close of session Tuesday to either recommend the bill continue, or let it die in committee by taking no action on it.

The bill survived and was noted “Title Suff Do Pass,” meaning the bill passed as introduced to the committee, without changes. The vote to pass was without opposition.

The bill’s author, Sen. Jeremy England (R-D51), presented the bill in the Committee on Public Health and Welfare Tuesday.

“The bill requires physicians and other healthcare providers to provide updated information to new and expecting parents that receive a diagnosis that their child will or may be born with Down syndrome,” England said. “The bill further requires the Mississippi State Department of Health to keep and make available updated information for healthcare providers, especially information concerning physical, developmental, educational and psychosocial outcomes, life expectancy, clinical course, and intellectual and functional development and treatment options. Information on support centers and hotlines will also be made available.”

The intent of the bill is to help ease the diagnosis for parents by providing information to answer their questions, England said.

“This bill is a logical next step to the Life Equality Act we passed last year, outlawing abortions solely on the grounds of race, gender or genetic abnormality,” said England. “I now look forward to presenting the bill in the next week in the Senate chamber.”