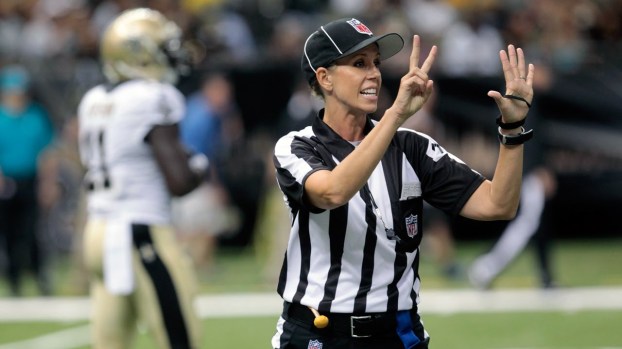 NFL photo / Mississippi's Sarah Thomas will be the first woman to officiate a Super Bowl during SB LV.

Mississippi’s Thomas is first woman to officiate a Super Bowl

A Mississippi native will be the first woman to officiate a Super Bowl game when the Kansas City Chiefs and Tampa Bay Buccaneers meet Sunday in Tampa for Super Bowl LV.

Sarah Bailey Thomas, 47, is a Gulf Coast native who lives in the Jackson metropolitan area with her husband and three children. She became an NFL official in 2015, the first full-time female official in the league’s history.

“To me and many others, Sarah’s selection to officiate Super Bowl LV is just a natural progression for a talented professional,” Hyde-Smith said.  “I can assure you, anyone who knows Sarah as I do will not be surprised by her successful career.  Sarah — a mother and career woman — has all the qualities I imagine the NFL wants in a good official: smart, confident, decisive, reliable and committed.”

Hyde-Smith said the entire state is proud of Thomas.

“We look forward to watching her latest history-making appearance at the Super Bowl,” Hyde-Smith said.

To view Hyde-Smith’s speech on Thomas in the U.S. Senate, click here.

Three new COVID-related deaths and 82 new cases have been reported for Lincoln County since Saturday. In the latest update... read more