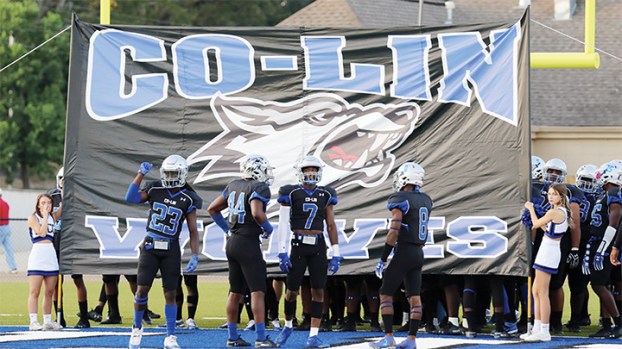 Photo by Co-Lin Sports Info / The Co-Lin football program announced a total of 31 signees this week after National Signing Day. Coach Glenn Davis and his staff picked up 29 high school athletes and a pair of Division I transfers for their roster.

In the release issued by the school, Davis said that the offensive line and defensive secondary were two big target areas for his staff during recruiting.

The Wolves signed five offensive linemen in the class led by Josh Trask Jr. of Natchez High. Trask was a Bernard Blackwell All-Star for the Bulldogs in 2020.

Another big piece in the future offensive line puzzle is Vicksburg High product Shar’Dez Taylor. Taylor will be a big addition to the position group as he comes in at 6-foot-4, 330-pounds.

The tight end group signed by CLCC was also an impressive one as they pulled in Harold Rhodes III of Jefferson Davis County High. Rhodes is a 6-foot-4, 260-pound player that was selected for the Mississippi/Alabama All-Star Game.

The Wolves also grabbed a pair of tight ends in Ellis Fair Jr. (Copiah Academy) and Jordan Magee (Magee HS). Fair played quarterback last season for the Colonels and rushed for over 1,000 yards while scoring 12 times on the ground.

Also on the offensive side of the ball from the high school ranks the Wolves signed one running back in Bobby Shanklin Jr. (Noxubee County) and one quarterback in Colton Gardner (Germantown HS).

Defensive back was the biggest position group of signees on that side of the ball with seven players joining the CLCC defensive backfield.

McNeal was a Bernard Blackwell All-Star game pick along with being tabbed as the Starkville Daily News All-Area Defensive MVP. He picked off seven passes as a senior and returned five for touchdowns.

The 6-foot-3, 230-pound Thomas was a Bernard Blackwell All-Star for 5A powerhouse West Point while the 6-foot-7 Ginn played quarterback, running back, receiver and defensive end during his high school career at Independence High just north of Hammond.

The Wolves also got a pair of mid-year enrollees from the college ranks in running back Tyrese Johnson -Fisher (Coastal Carolina) and defensive lineman Nathan White (Florida International).

Co-Lin (2-1) was only able to play three games last season as COVID-19 issues forced the program to shut down their season prematurely.

A cornerstone of the Bogue Chitto football team has planned his next step as senior offensive lineman Davis Hart signed... read more