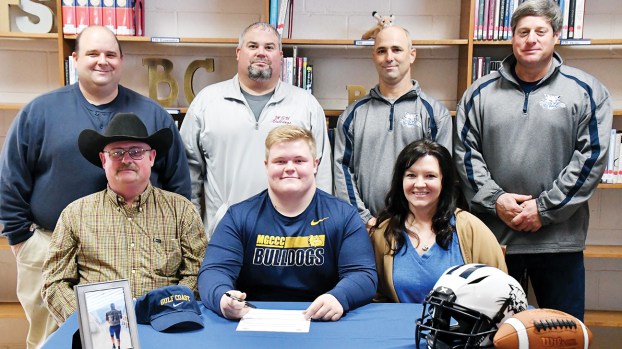 A cornerstone of the Bogue Chitto football team has planned his next step as senior offensive lineman Davis Hart signed a letter-of-intent Friday with Mississippi Gulf Coast Community College.

Hart was a Daily Leader All-Area selection as a junior and senior. He’s played all down the offensive line while at Bogue Chitto, but his home in college is likely the center position.

Also a standout in powerlifting for the Bobcats, Davis squats 500 pounds, deadlifts 450 and benches 275. BC head coach Gareth Sartin says that love of the weight room is a big reason for Hart’s success.

“Gulf Coast is getting an outstanding player and person,” said Sartin. “Davis is a guy that just loves all aspects of playing football. He doesn’t just love the games — he loves the practice side of it, and he loves lifting weights. He’s a team-first player and a has been a leader for us on and off the field.”

A three-year starter, Hart was part of a BC team as a sophomore that finished as runners-up in Region 7-2A and the team then repeated that feat his senior year.

Bogue Chitto had a three-year postseason drought going when the school made the transition from 1A to 2A. Hart and his fellow members of the class of 2021 were part of a team that snapped that streak as freshman. The Bobcats would then make the playoffs all four seasons of their varsity careers.

Gulf Coast finished 5-1 last year in a COVID-19 shortened season. The Bulldogs were 5-0 against division opponents before losing 40-13 to Northwest Mississippi C.C. in the MACCC state title game.