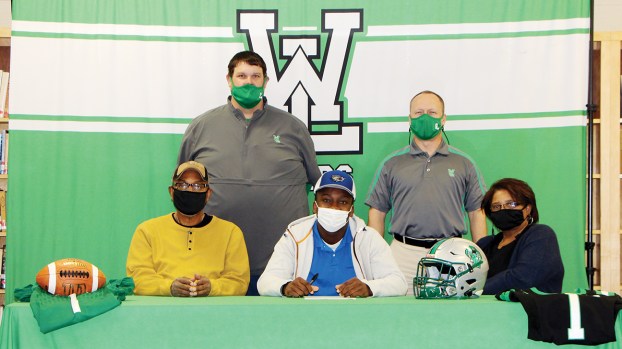 For the first time in program history, a West Lincoln Bear will become a Co-Lin Wolf. West Lincoln senior wide receiver Chris Freeman made history Wednesday by signing a letter-of-intent to join the Co-Lin football program.

In the just over 20 years since the Bears created their football program, they’ve have had players sign with Hinds and Southwest, but never with Co-Lin.

Wesson and the campus of Co-Lin are familiar to Freeman though as his father David was a long-time campus police officer at the school before retiring. Officer Freeman was a legend for quickly snagging students trying to sneak back into their dorms after curfew.

His son has a different type of speed though and grew into being one of the leaders within his team for West Lincoln head coach Brad Bland.

“Chris has grown up and matured greatly in the time I’ve been here,” said Bland. “After his junior season ended, we sat down and talked about the expectations I was looking from for him personally and the senior class as a whole. From that moment on he became one of our leaders on the team and pushed his teammates and himself hard in the weight room and on the field.”

On the ground Freeman rushed 33 times for 277 yards and four scores. He averaged 19.6 yards per catch in hauling in 13 passes for 157 yards and one touchdown. Freeman also made 31 stops as a defensive back for the Bears.