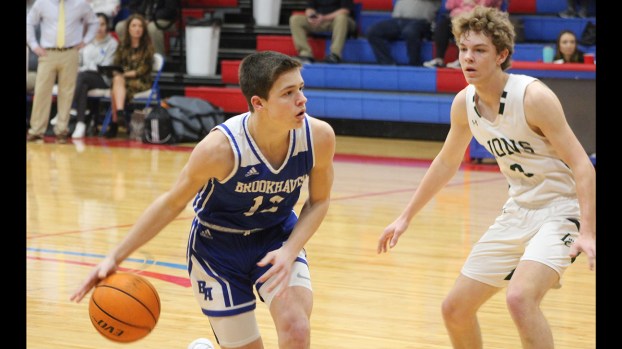 Photo by Cliff Furr Brookhaven Academy sophomore guard Trevor Fortenberry and his team will take the court Wednesday at 7 p.m. as they face Hillcrest Christian in the MAIS 4A South State Tournament hosted by Simpson Academy. The BA girls’ team takes the court at 5 p.m. to face homestanding Simpson in their opening round game.

The campus of Simpson Academy in Mendenhall is the go-to spot for local MAIS basketball fans this week as the Cougars host the 4A South State Tournament.

There will be a caravan of Brookhaven Academy supporters making the trek either across Hwy. 28 or up Hwy. 13 to SA as both Cougar teams play Wednesday in tournament action.

The stakes don’t get much higher for BA as both squads come in as the No. 1 seed from their division after winning the District 4-4A crown with identical 8-0 records in district play.

The winners of Wednesday’s games will qualify for the state tournament while the losers will have their season ended.

The Lady Cougars play first at 5 p.m. against the home team — Simpson Academy. The BA boys take the court at 7 p.m. to tangle with Hillcrest Christian.

Hillcrest will be the host of the MAIS 4A State Tournament that begins on Feb. 16 and ends on Feb. 20 with championship and consolation games.

The Lady Cougars boast a 27-7 record this season and are facing a Simpson Academy (17-9) team that’s very familiar to them.

Kessler sees the upcoming matchup being another game that comes down to who can guard their basket best.

“The stronger defensive team will win this game,” said Kessler. “I don’t think we could go much deeper with our scouting report. We’ve seen them in person, and we’ve seen them on film and our girls know what to expect when we hit the court. Now it just comes down to executing that plan.”

Simpson hasn’t played since the BA game on Jan. 29. Their district had planned to play a tournament for seeding ahead of the south state tournament, but that event was canceled due to COVID-19 issues.

The district that BA plays in had already decided not to have a division tournament as they also skipped having one last year. Because of that the Cougars regular season ended last week with a pair of wins over Silliman Institute and Cathedral School.

The tournament field is stocked with teams that BA saw during the regular season as they split a pair of matchups with Hartfield Academy (the No. 1 seed from District 3-4A) and also split a pair of games with Hillcrest Christian.

Hillcrest finished No. 2 in District 3-4A, and they’ll likely be the next opponent for the winner of the BA versus Simpson Academy game.

The advantage for Kessler’s team should be in the paint as sophomore forward Lillie Gates is a real post presence for BA.

“I expect a big part of their game plan will be doubling down on Lillie when we try and go inside,” said Kessler. “We’re going to need to make the extra pass to find the open person and then knock down those shots.”

Simpson Academy is coached by longtime leader Linda Deer who is in her second stint at the school.

Last season Simpson finished as 4A runners-up after losing to Hartfield Academy on a buzzer beater. The season before that Simpson won the state championship in the old MAIS AAAA Division II classification.

“They aren’t as tall as they’ve been in the past,” said Kessler. “They basically start five guards, but they get after you in the half court defensively as they mix some man and zone defenses in. They’re just a good, well coached team.”

The drama surrounding Hillcrest Christian boys’ team falling to the No. 4 seed in District 3-4A could probably fill a novella, but in the interest of space here is an abridged version.

Hillcrest Christian had an ineligible player suiting up for them during some of their division schedule played after Christmas.

The Cougars were not banned from postseason play, but they had to forfeit the games they won while using that player.

HCA had three games remaining in their schedule after that verdict came down from the MAIS.

By winning two of those three games, the Cougars from Hillcrest had assured themselves the No. 3 seed in the south state tournament. At least that’s what BA head coach Josh Watts thought.

And yet, Hillcrest is good enough to beat either of those teams on the right night. So, staying away from them in an opening round matchup is what Watts and his team had hoped for when they won their district with an 8-0 division record (18-10 overall).

Here’s where things get complicated. Most districts count a forfeit as a 2-0 victory for the winner. District 3-4A counts a forfeit as an 18-0 win for the victor — that’s because they use the same tiebreaker system as their football teams use while most other divisions have basketball specific scenarios for events like this.

All that to say that Hillcrest beat Park Place Christian Academy by 13 on the court but technically lost to them by 18 due to a forfeit. So instead of facing Park Place, Watts and his team were informed they’d be playing Hillcrest Christian.

“Am I happy about it? No,” said Watts. “Ultimately though, the MAIS backed them up on it and we’re playing Hillcrest. They’re a talented team that really gets up and down the floor.”

BA met Hillcrest on Nov. 21 of this season and the Cougars from south Jackson took a 69-46 win.

Brookhaven was far from full strength that night as senior forward Gage Brown was out with an injury. Also missing due to quarantining protocols were everyone with the last name Fortenberry.

That makes up close to a quarter of the BA roster as junior forward Tyler Fortenberry leads the team in scoring and starts alongside his brother Trey and cousin Dylan. Sophomore Trevor Fortenberry is one of the top subs off the bench for Watts.

“Without a doubt the schedule that we’ve played this season has been the toughest since I’ve been coaching here,” said Watts. “And you hope that those tough games will prepare you for one like this where it’s win or go home. I think my guys will be focused.”