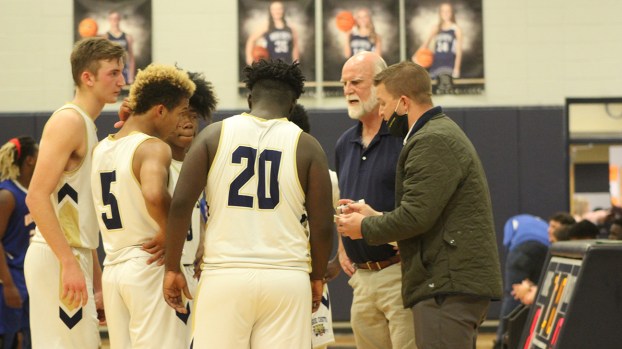 Photo by Cliff Furr / Bogue Chitto assistant coach Marc Howard and head coach Robby Walters talk strategy with their team during a second half timeout Tuesday night at the Region 7-2A Tournament.

Bobcats knock off No. 1 seeded Wesson in region semifinals

At some point in the first half Tuesday night at Bogue Chitto, the Bobcats started believing. Not just the players on the court, but the fans in the stands that had stayed to watch No. 4 Bogue Chitto take on top-seeded Wesson in the Region 7-2A Tournament semifinals.

Wesson had won its two previous matchups, beating the Bobcats 44-28 and 53-41 in those two meetings.

Tuesday felt different though, as the Bobcats communicated defensively as they talked and moved in their 2-3 zone. They hit some open shots and kept Wesson from getting easy baskets in transition.

At halftime, Wesson only led 17-16. The flow of the game in the second half followed a similar pattern and when BC got a lead, they didn’t give it up. They held off a late Cobra surge to take a 40-38 win and punched a ticket to the tournament championship Friday at 7:30 p.m.

BC head boys’ basketball coach Robby Walters said it was the sweetest win his team has tasted since he took over the program last season.

“They played together,” said Walters. “We did what we could do and didn’t try to do anything we couldn’t do. Very proud of these guys.”

What the Bobcats can do is score from deep as they had three made 3-pointers in the first half — two from Tae Nelson and one from Tra Mackabee.

Mackabee would then add another deep ball early in the third quarter that gave the Bobcat fans a jolt of energy. Mackabee — the son of former Brookhaven High standout guard Fred Mackabee — finished with nine points while Nelson added 12.

Another thing the Bobcats can do is score in close as senior Tristan Buffington and sophomore Jay May are two able bodied forwards that fight for space in the paint. The 6-foot-5 Buffington scored 13 in the game and was at his best in the final quarter when he scored eight of the 14 total points for Bogue Chitto.

With a minute left in the third quarter Nelson snatched a rebound and drove the length of the court to lay it up as BC pushed their lead to 26-21.

A Buffington layup on the first possession of the fourth quarter made the lead 28-21.

That’s when Wesson senior guard Jason Edwards found his sweet spot in the deep corner opposite the Cobra bench.

Edwards hit back-to-back 3-pointers to pull Wesson within 28-27 as Walters called a timeout to settle his team.

BC answered with another Buffington basket to make their lead 30-27.

At this point if you’d been playing NBA Jam, Edwards would have been shooting a basketball that was on fire. His third straight 3-pointer — again from the corner — tied the game at 30.

Another Buffington basket put BC back up 32-30. He’d then get a big block on the opposite end to give BC possession back.

Wesson senior Larson Lewis hit a driving layup that made the score 35-33 for Bogue Chitto with 1:22 left in the game and less than a minute later he’d make one free throw to make it 36-34 game with 36 seconds left.

Forced to foul, Wesson sent Nelson to the free throw line. He knocked them both down and then got another Buffington basket at the rim for their final points.

The Cobras scored at the buzzer to make the final deficit two points. Antrelle Sims led Wesson with 12 points while Edwards added 11.

“We didn’t get anything in transition and that’s something that we’ve done well all year,” said Wesson coach Rusty Newman. “Buffington really hurt us inside.”

Wesson will face Enterprise Thursday in the consolation game at 7:30 p.m. Both teams will then play on the road next week in the MHSAA 2A state tournament.

Region 7-2A matches up with Region 2 in the opening round of the playoffs. That division will play their semifinals on Thursday and title game on Friday.

Newton entered the postseason as the top overall seed and faces Scott Central in the first semifinal. Union is the no. 2 seed and takes on Philadelphia in the other semi.

Bogue Chitto will take on Loyd Star Friday at 7:30 p.m. on their home court in the championship game. The teams have already met three times this season.

On Dec. 4 in a Lincoln County Tournament game at Loyd Star the Bobcats shot the cover off the ball in getting a 66-46 win. Loyd Star took a 48-42 victory on Jan. 19 and last week the two schools went to overtime before BC pulled out a 50-46 win.

The crowd wasn’t big Tuesday, but with full cheer squads out leading the chants — it was lively. As the Bobcats scratched to hold the lead late, you could feel how badly their fans wanted their team to hold on and upset the top seed in the tournament.

“Before the girl’s game Monday night coach Mickey Myers spoke to the team,” said Walters. “He told them that in the region tournament you’ll often see some magic happen — tonight felt a little magical.”

Loyd Star junior point guard Aubrey Britt is known all over the state as one of the top distance runners... read more