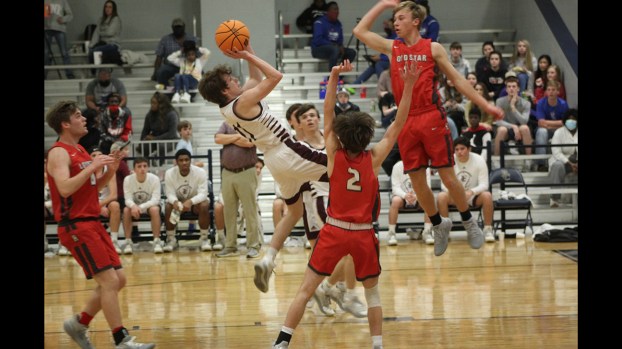 Photo by Cliff Furr Enterprise senior point guard Hib Johnson finds himself surrounded by Loyd Star defenders in the paint Tuesday at the Region 7-2A Tournament.

Tuesday the Region 7-2A Tournament hosted by Bogue Chitto began with the No. 2 seeded Enterprise Yellow Jackets meeting No. 3 seeded Loyd Star for the fourth time this season.

The game was like the previous three meetings between the school, played in a half-court setting with a slower pace. From tip to final horn, it was all over within an hour.

The difference Tuesday was that Loyd Star had a few runs of offensive efficiency that spurred them past the Jackets for a 41-31 win.

Thornton knocked down a pair of 3-pointers in his mini-run, which was sandwiched around three straight possessions that had an Enterprise turnover.

Turnovers plagued EAC all night as the Jackets had too many possessions that came without a shot attempt.

“We missed some shot early and got behind and then we started to panic and do too much,” said EAC head coach Shane Adams. “We were just trying to make the perfect pass and went away from playing our game.”

Loyd Star led 12-4 after one quarter.

Thornton finished with a team high 13 points to lead Loyd Star as he went 3-of-6 from the 3-point line.

He opened the second quarter with a basket that was his tenth consecutive point for Loyd Star.

The next Hornet to step up was senior forward Will McCullough. McCullough made back-to-back 3-pointers in the second quarter as Loyd Star pushed their lead out to 20-8.

The Loyd Star lead was 22-14 at halftime but in the third quarter EAC started to chip into that advantage.

And again, another Loyd Star player found himself heating up from deep. This time it was sophomore guard Casen DeHart who popped consecutive 3-pointers to give his team a 30-22 lead with 31 seconds left in the third.

The Hornets were able to hold that double-digit advantage throughout the fourth quarter in securing their win.

Loyd Star coach Seth Britt says made baskets were hard to come by in the previous losses to the Jackets.

“In our losses to them we’ve shot 17 percent and 24 percent,” said Britt. “Enterprise does a really good job of controlling the tempo, but tonight we were able to make enough shots to hold our lead.”

It’s been a season of runs for Loyd Star as Britt starts two sophomores and a freshman while bringing multiple other sophomores off the bench.

The Hornets (8-10) lost five in a row to start the season before winning six in a row within division play. Before Tuesday Loyd Star had lost three in a row to EAC, Wesson and Bogue Chitto.

A week ago, Bogue Chitto beat Loyd Star 50-46 in overtime. Friday the teams will meet at 7:30 p.m. for the region championship.

EAC (9-7) meets Wesson Thursday at 7:30 p.m. in the consolation game. Taylor Presley led Enterprise with nine points in the loss.

The Hornets will host an MHSAA 2A State Tournament game next week while the Yellow Jackets will play on the road in the opening round.

A third quarter scoring surge by West Lincoln was the difference Monday night in their Region 7-2A semifinal showdown with... read more