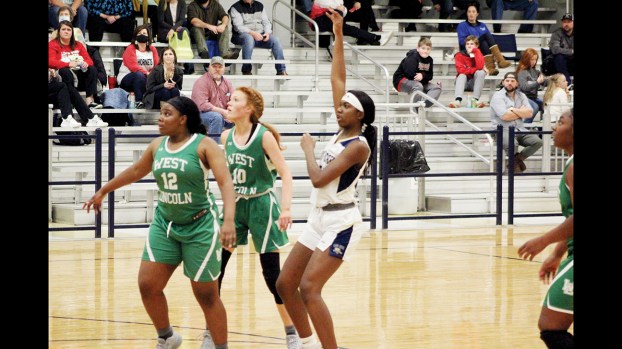 A third quarter scoring surge by West Lincoln was the difference Monday night in their Region 7-2A semifinal showdown with Bogue Chitto.

The green-clad Lady Bears won the third quarter 18-6 after leading by just three — 27-24 at halftime.

That deficit would never be cut into during the final eight minutes as West Lincoln moved on with a 56-40 win. The Lady Bears will face Loyd Star at 6 p.m. Friday in the title game while Bogue Chitto takes on Wesson in the consolation game Thursday at 6 p.m.

West Lincoln senior forward Brittany Sturkey had one of the quietest 20-point games of her career as she scored 12 points in the second half for her team.

Sturkey took what the defense gave her as most of her points on the night came at the basket and many came off turnovers.

A layup by BC freshman forward De’Mya Porter off a smooth assist from junior guard Riley Carter cut the WL lead to 27-26 just after the start of the third quarter.

That’s when the West Lincoln offense started to heat up and build some steam. Senior guard Jena Hughes scored 10 points in the third quarter including a banked in 3-pointer that put her team up 37-29.

Sturkey followed that with a steal and a layup and then Hughes picked a pass of and sent it ahead to sophomore point guard Kara Beth Addison. Addison returned the ball back to Hughes for a layup and BC coach Robby Walters was forced to call a timeout as his team then trailed 41-28.

West Lincoln (15-2) was playing for the first time since beating Bogue Chitto 42-36 at home back on January 26. Since then, the program has been shut down as the school dealt with an increase in COVID-19 cases.

There was no visible rust for the Lady Bears in their return to the court.

“We had some good practices over the weekend, but I was anxious to see how we’d be in the first game back after quarantine,” said Smith. “The third quarter was a good answer. Jena Hughes probably had her best game in green and it wasn’t just her scoring.”

Hughes has taken over one of the top spots on the West Lincoln 2-3 zone alongside Addison. It’s a position that Sturkey has played in the past. That allows Sturkey to slide down on the block while sophomore Ta’Kyla Brothern mans the middle and senior A’Mya Brown holds down the other side of the lane.

The Lady Bears eat up the court with their hands wide and don’t allow many windows for shooters.

Porter led BC with 19 points while Carter added 14.

The forfeits by West Lincoln against Enterprise and Wesson due to quarantine affected the region standings ahead of this game.

The forfeit win given to Wesson put them in third place and moved BC down to fourth place. It meant that Bogue Chitto had to play in a No. 4 verses No. 5 game last Friday against Enterprise. BC won that game 54-31.

West Lincoln will host a playoff game next week while Bogue Chitto will play on the road in their 2A tournament opener.

The campus of Simpson Academy in Mendenhall is the go-to spot for local MAIS basketball fans this week as the... read more