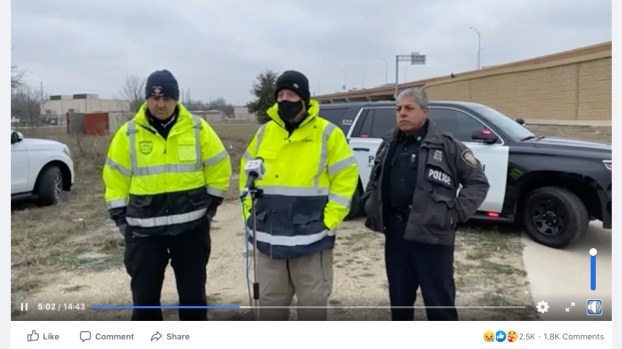 Screen capture / Representatives of the Fort Worth Police Department and Fire Department speak to reporters Thursday.

Fort Worth police say at least five people were killed in a massive crash involving 75 to 100 vehicles on an icy Texas interstate.

The number of injured is still unknown as they are still working the accident.

The pileup happened as a winter storm is dropping freezing rain, sleet and snow on parts of the U.S.
It happened around 6:30 a.m. on I-35W just north of downtown Fort Worth.

Multiple people were trapped inside wrecked vehicles for hours after the crashes, including a number of 18-wheelers, local media outlets reported.
Fort Worth authorities confirmed there were at least five deaths, and crews were still looking for people trapped in the wreckage by mid-morning.

More than 30 people were hospitalized after the pre-dawn collisions that were caught on video. Fort Worth police officers reported hearing drivers screaming from their cars as first responders struggled to get to them.

First responders said there are still some cars wedged underneath other vehicles, causing some of the uncertainty around how many causalities there are, but they added there are some fatalities still likely on the scene and it could take some time to reach the bodies.

In a press conference video from Fort Worth Police Department, a spokesman for the Fort Worth Fire Department said first responders had difficultly reaching the vehicles due to limited traction on the roads and that the cleanup would take “a long time.”

Fourteen ambulances were used to transport 36 individuals to area hospitals from the “very complex scene,” another FWPD spokesman said where “even walking is treacherous.”

Freezing rain in the region caused roads to glaze over with ice, making it near impossible for drivers to maintain control.

In Austin, 100 miles to the south, emergency officials said that more than two dozen vehicles were involved in a pileup on an icy road, and one person was injured.

The Lincoln-Lawrence-Franklin Regional Library has been awarded Star Library Status for the third year in a row. The Mississippi Library... read more