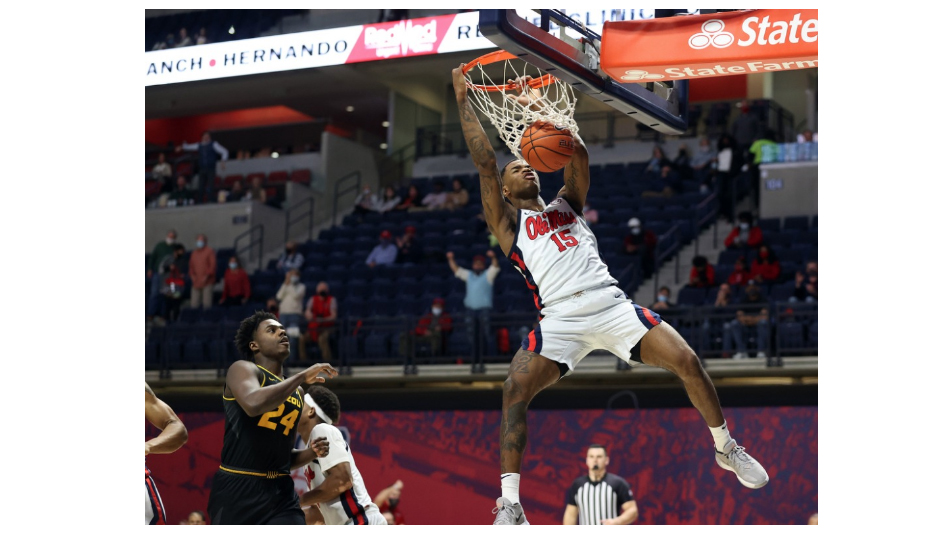 (AP) — The recent mastery of ranked teams continued Wednesday night for Mississippi as Jarkel Joiner scored 21 points as the Rebels beat No. 10 Missouri 80-59.
Ole Miss (11-8, 6-6 Southeastern) stretched their win streak to three games, including a win over No.16 Tennessee and the No. 10 Tigers. The surge left the Rebels in the middle of a logjam of the SEC standings, with eight teams within three games of each other.
“Having success gave us confidence,” Mississippi coach Kermit Davis said. “We didn’t give up baskets in transition and did a good job staying in front of them. You can’t let Missouri play downhill.”
Devontae Shuler and Luis Rodriguez added 15 points apiece for the Rebels (11-8, 6-6 Southeastern), extended their winning streak to three games that includes wins over No. 16 Tennessee and the No. 10 Tigers.
Ole Miss used a 17-2 run that spanned the final two minutes of the first half and the opening three minutes of the second half to build an insurmountable 51-37 lead. The Rebels led by as many as 22 points midway in the second half as Missouri never seriously threatened again.
“That (17-2 run) was the critical part,” Davis said. “It’s a coach’s cliché but it’s true how you finish and how you start. We got out in transition, got our hands on the ball and made some good plays. It was great to see.”
Dru Smith led Missouri (13-4, 6-4) with 17 points as the loss snapped a three-game winning streak. Javon Pickett added 10 points as the Tigers struggled at the free throw line, shooting 5 of 15 (33 percent) and were out-rebounded 34-19.
“We just didn’t have the edge we normally have,” Missouri coach Cuonzo Martin said. “I don’t know where to start. We didn’t have it tonight and give those guys credit.”
Ole Miss finished 29 of 51 (57 percent) from the field and 8 of 21 (38 percent) from three-point range, including five by Shuler. The Rebels were 14 of 17 from the free throw line (82 percent) and had 21 assists for 29 baskets, including four apiece from KJ Buffen and Robert Allen.

BIG PICTURE
Missouri: After winning six of the last seven starts, a road upset to suddenly streaking Ole Miss was disappointing, but not totally unexpected. The Tigers managed only three field goals in the opening eight minutes of the second half, effectively ending any comeback bid.
Ole Miss: Flying under the radar, the Rebels have quietly won three consecutive starts and moved into the upper half of the SEC standings, but play three of the next four games on the road, which figure to determine any postseason hopes.

POLL IMPLICATIONS
After climbing into the Top 10 for the first time in more than eight seasons, the upset loss virtually guarantees a drop from that height. However, a Saturday home win over Arkansas would go a long way in keeping the Tigers among the Top 25.

UP NEXT
Missouri: The Tigers host Arkansas on Saturday. Missouri defeated the Razorbacks 81-69 on Jan. 2.
Ole Miss: The Rebels visit South Carolina on Saturday.