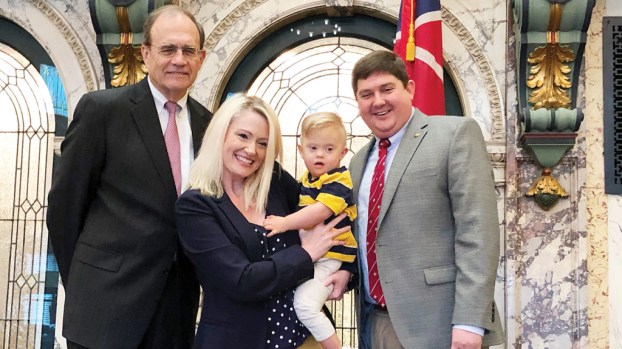 Sen. Jeremy England stood before his fellow senators and asked that SB2746 Hudson’s Law — requiring healthcare providers to provide information to parents who receive a postnatal diagnosis of Down syndrome — be voted on by roll call.

With no votes of “no” or “present,” the bill passed with votes counted as “yes.”

Hudson’s Law is so named for the 3-year-old son of Loyd Star native CJ Hartman, a lieutenant colonel in the United States Air Force, currently stationed on the Mississippi Gulf Coast. Hudson was diagnosed with Down syndrome after being born to Hartman and his wife, Mika.

Hudson became the face of a movement to fight abortion due to genetic abnormalities when the Human Life Equality Act of 2020 was signed into law July 1, 2020, by Gov. Tate Reeves. The law prohibits abortions to be performed due to race, gender or genetic abnormality except in an emergency.

On the day the final vote was taken in the Senate’s chamber, Hartman said she heard one senator ask if “Sen. Hudson” was present and how he had voted.

So Hudson gained a new nickname and secured his place as the face of the fight for life equality in Mississippi.

Hudson’s Law, which also will require the Mississippi State Department of Health to provide appropriate information to healthcare practitioners and post it on the MSDH website, was introduced into the House, as well, as HB1004 on Jan. 18, the same day SB2746 was introduced in the Senate by England.

HB1004 died when it was not brought out of the Committee on Public Health and Human Services before the deadline for bills to be returned to the floor.

“Hudson is a little boy who lives across the street from me,” Sen. England said during his summary of the bill. “He was born with Down syndrome. I’ve come to know his family and him throughout this process.”

“When they were [given the diagnosis], there was no information provided that would have helped her along with their decision making going forward and let them know what they were to expect,” England said. “The bill requires the Department of Health to make available certain information for these healthcare providers … to include written documents that would outline the physical, developmental, educational and psychosocial outcomes, life expectancy, clinical course, and intellectual and functional development as well as treatment options for children born with Down syndrome.”

The bill will move next to the desk of Gov. Reeves to be signed into law.

“That’s important information for these families to receive,” England said.

Thursday, State Auditor Shad White announced his office collected $66,574.44 in payments to taxpayers across the state in January after... read more