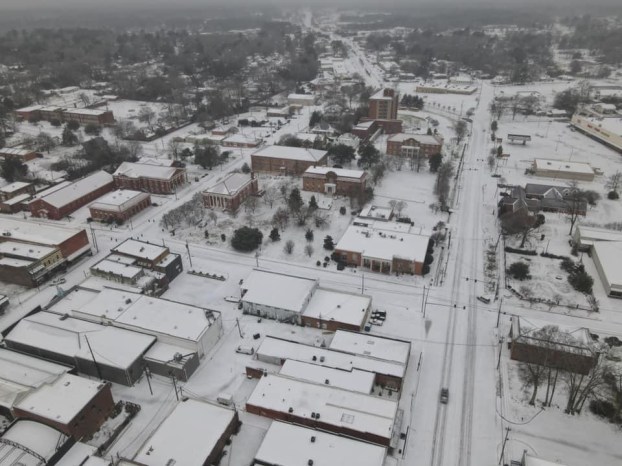 Michael Herring of Brookhaven took photos from his drone. This one is at 350ft of downtown Brookhaven, Feb. 15, 2021.

Travel still dangerous, though city has closed no roads, bridges

No roads or bridges have been closed in Brookhaven and the city has no plans to do so, barring negative impact from this week’s winter storm, though travel conditions remain hazardous.

Public Works Director Keith Lewis gave the update to the city’s board of aldermen Tuesday night via conference call.

Water mains in the city are in good shape, he said, but the real test will come when thawing begins later.

With 100% chance of rain forecast for Wednesday, Lewis reported Galey cautioned that an expected refreeze Wednesday night would worsen conditions for travel Thursday. Crews will be on standby until safer conditions prevail “and we will do what we can do,” Lewis said.

All county health departments, offices and WIC centers will be closed across Mississippi on Wednesday with some exceptions in the... read more