Holmes County Central too much for Lady Panthers Tuesday 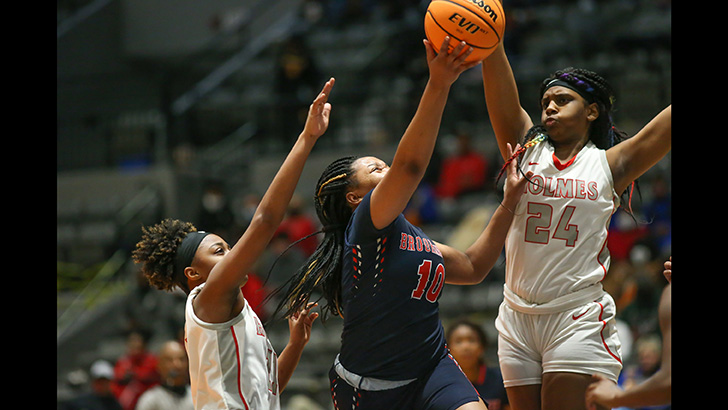 Holmes County's Elyshiah Huntley (24) tries to block the shot of Brookhaven's Ashanti Louis (2/10) in the first half. Holmes County Central and Brookhaven played in an MHSAA Class 5A semifinal basketball game on Tuesday, March 2, 2021 at Mississippi Coliseum. Photo by Keith Warren

In his long career first leading the boys and now the girls’ basketball team at Brookhaven High, Preston Wilson has taken more than a few teams to the Big House a.k.a. the Mississippi Coliseum as state tournament qualifiers.

From that experience Wilson knows that nerves can be an issue when you’re one of the four remaining teams in your classification and are playing for a championship birth in early March.

Tuesday in the MHSAA 5A semifinals, Holmes County Central (12-4) jumped up early over a jittery group of Lady Panthers (11-6) and never let up as they won 66-30.

“I don’t want to take anything away from Holmes County because they are a talented, well-coached team,” said Wilson. “The different surroundings and weight of the moment definitely got to use early though, and we never recovered.”
Junior forward Denaejah Williams hit a shot to put BHS up 2-0 to start the game, but that would be the only lead of the night for Ole Brook.

Greer and her team won the 5A state title in 2016 with a 30-1 record. The school itself was formed in 2014 with the consolidation of three smaller schools — S.V. Marshall, J.J. McClain and Williams-Sullivan.

Tuesday, they pressured the ball and put pressure on Brookhaven by driving to the rim.

“When we looked at them on film, there wasn’t one matchup that we thought we could exploit, they’re just a very well-rounded team,” said Wilson.

BHS only had one player in double figures, senior guard Ashanti Louis with 10 points.

A rock-solid point guard during her career on East Monticello Street, Louis has been part of some big wins over the last four years.

“That’s what the coaches and I were telling our seniors after the game (Louis and Timyia Cooper),” said Wilson. “As freshmen and sophomores, they made the quarterfinals and last year they made the finals before making the semis this year — that’s a career you can be proud of.”

Louis was the only returning starter from the 5A runners-up team last season. Brookhaven returns their top two leading scorers next season in sophomore Angel Wilkinson (13 ppg) and junior Kyja Willis (12 ppg).

Williams — a 6-foot junior — also returns inside as does 6-foot-2 sophomore Leah Wilcher.

“This group exceeded our expectations and I know most of them are ready to get back in the gym as soon as possible to start working for next season,” said Wilson. “With all the uncertainty that we had due to COVID-19 and us playing very few non-region games because of it — they really showed some resiliency to make it this far.”