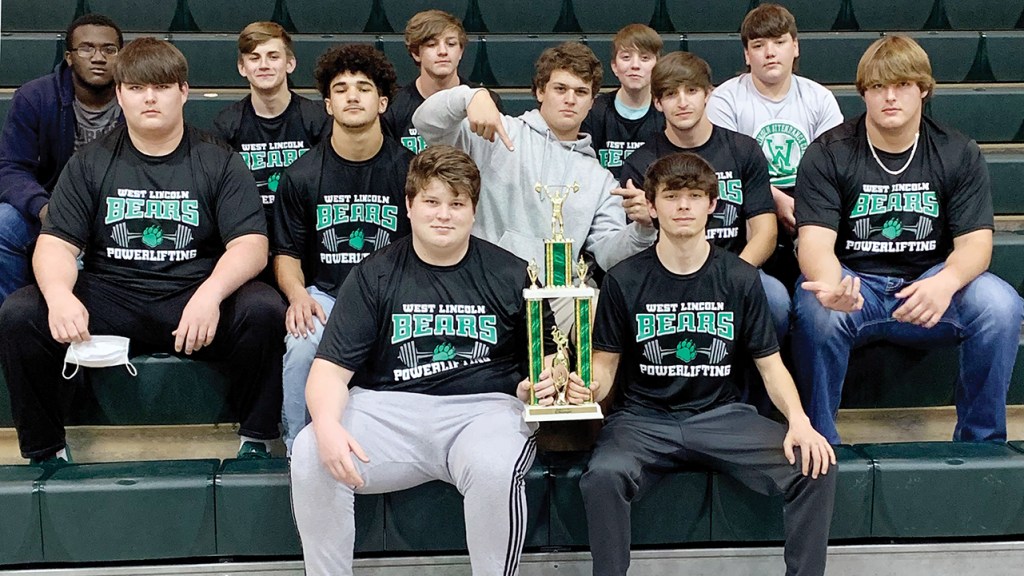 Photo submitted Members of the West Lincoln powerlifting team pose with the Region 4-2A trophy after posting the team high score at the meet. Today the Bears will host the MHSAA 2A South State Meet in Jack Case Gymnasium beginning at 11 a.m.

Jack Case Gymnasium will be filled with the sound of clanging iron Saturday as West Lincoln hosts the MSHAA 2A South State Powerlifting Meet.

The Bears are coming of capturing the Region 4-2A title last month.

“It was the first time in school history for us to win the region meet,” said WL coach Brad Bland. “Very proud of my guys.”

Top three finishers in each class qualify for the south state meet.

Top finishers for the Bears included Tyler Hall who finished first in the 123-pound division and Jordan Davis who won the 132-pound division.

Caleb Nations was the second-place finisher in the 181-pound class and Gabe Bush was second overall in the 220-pound division. Also finishing second was Jackson Taylor in the 308-pound class.

Wesson got first place finishes in the Super Heavyweight class from Justin Beal, in the 275-pound division from Jaylon Suttles, and the 198-pound class from Collin McGowen.

Ty Turner finished runner-up in the 114-pound division and Orlando Smith also got a second-place finish for the Cobras in the 165-pound class.