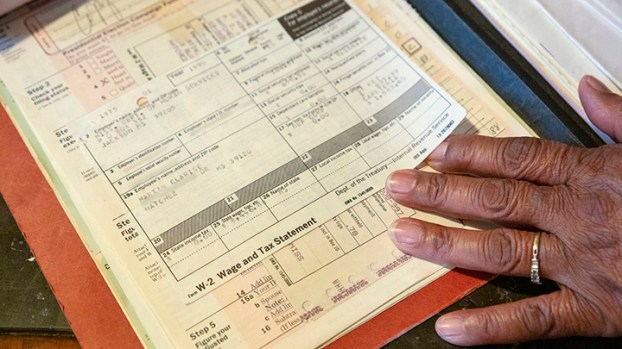 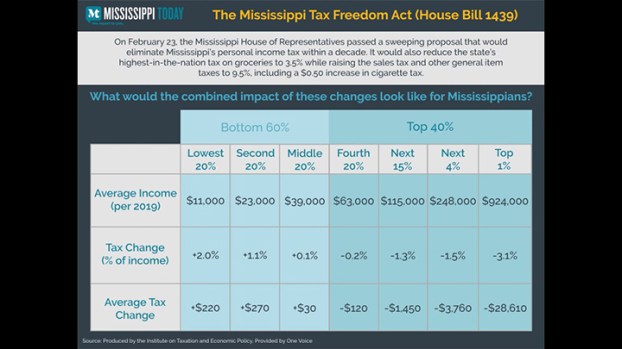 The bottom 60% of Mississippi’s income earners would be paying more taxes under legislation that has passed the House while the top 40% would be paying less, according to an analysis conducted by a Washington, D.C.-based policy think tank.

A person in the top 1% with average income of $924,000 would pay $28,610 less in combined state taxes under the sweeping legislation authored by Speaker Philip Gunn, R-Clinton, while the next 4% of state income earners would save about $3,760 in taxes on average. Based on the analysis conducted by the Institute of Taxation and Economic Policy, those earning $49,100 or above would pay less in taxes, while individuals earning less than that would pay more in state taxes than they currently are paying.

The analysis was of the major components of the bill that would:

“We know for sure that the combined impact of the tax plan will make Mississippi’s tax system more inequitable,” said Kyra Roby, a policy analyst for One Voice that advocates for Mississippi’s poor and working families.

House supporters of the massive tax restructuring bill have said the proposal will be revenue neutral at the onset when the sales tax is increased, the grocery tax is cut from 7% to 4.5% and the income tax is eliminated for to bottom almost 60% of wage earners. During the next five years, the grocery tax will be cut to 3.5% and the income tax will be phased out in as few as 10 years. The bill contains a trigger that would postpone a reduction in the income tax in any year it does not meet specified growth standards.

The impact of the bill has been the subject of much debate since it was unveiled on Feb. 22 and passed on the House floor the following day. It is now pending in the Senate. The study by the Institute on Taxation and Economic Policy — known as a progressive think tank that provides analysis of federal, state and local taxes — is the first publicly released analysis of how socioeconomic groups of Mississippians would be impacted by the bill. Roby said the Institute used its tax modeling tool to reach its conclusion.

Both Gov. Tate Reeves and Lt. Gov. Delbert Hosemann have voiced concerns about the bill raising taxes — primarily sales taxes and excise taxes — on certain “big ticket items,” such as airplanes and farm equipment. Hosemann, who presides over the Senate, has requested a study on the impact of the legislation from the state economist. That study is pending and presumably will be concluded before the Senate decides whether to take up the proposal. Other conservative-leaning groups, such as Empower Mississippi, have generally found the bill would positively impact the state.

A study released Monday by Joshua Hendrickson and Ronald Mau, economics professors at the University of Mississippi, found that the bill would increase the state’s gross domestic product by $371 million annually by making the tax structure more efficient. In general, the study found that the income tax, which the House plan would eliminate, creates inefficiencies in the economy while a tax on consumption, such as the sales tax which would be increased by the House plan, does the opposite.

Gunn said the Ole Miss study “further demonstrates” the plan “is based on sound tax policy. Eliminating the income tax will reward work, savings and investment, and will increase the size of our state economy, all while maintaining the revenue we need to satisfy priorities. Mississippians need the benefits of this tax relief now. I encourage Lt. Gov. Hosemann and the Senate to work with us to pass this tax reform this session.”

The 7% sales tax already is the state’s largest single source of revenue. One Voice and others argue the sales tax results in a higher tax burden for poor people since it forces them to spend a larger share of their income to pay for basic needs. Gunn said his proposal reduces the grocery tax to help offset the impact on the state’s poor of raising the general sales tax by 2.5 cents on each dollar spent. But Roby said the bill still would result in a bigger tax burden on lower income earners.

Even though the state’s personal income rate is one of the lowest in the nation, analysis done by One Voice and the Institute on Taxation and Economic Policy said it is still the only state tax where wealthy Mississippians pay a larger share of their income than do poor Mississippians.

Overall under the current state tax structure, “The lower and middle individuals share a greater burden than the state’s wealthiest,” Roby said.

The study by the Institute on Taxation and Economic Policy said the House bill would place even more of the tax burden on Mississippi’s working poor and middle class.

Wesley Tharpe, deputy director of state policy research with the Center for Budget and Policy Priorities said, “Cutting the grocery tax on its own would be good policy and good for working and low income families, but the savings would likely not be enough to offset the increase from such a significant increase in the sales tax.”

On the other hand, the analysis by the Ole Miss professors found: “This proposed tax reform aims to reduce inefficiencies in the state’s tax system and establish a more competitive tax environment. In principle, a consumption-based tax system has some desirable characteristics in comparison to an income-based tax system.”

The Ole Miss study, in contrast to the beliefs of Roby at One Voice and Jones with the Southern Poverty Law Center, found that the proposal will be near revenue neutral and that they believe their findings of how the changes could improve the overall economy “are conservative.”

The Ole Miss professors concluded, “We indeed find that the proposal is close to revenue-neutral. The elimination of the individual income tax’s inefficiencies would increase real GDP by $371 million per year.”