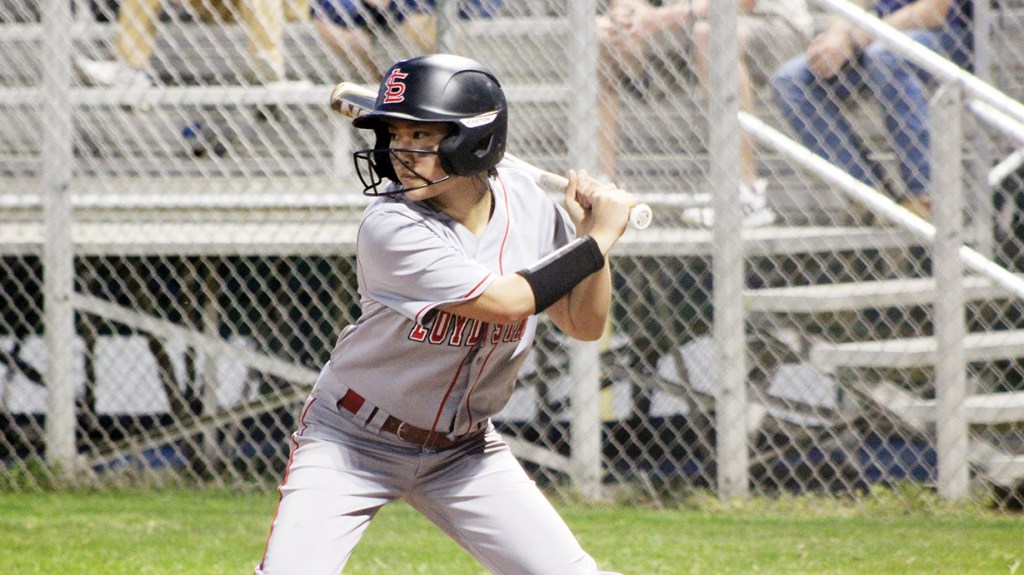 Photo by Cliff Furr Loyd Star sophomore Carson Hughey had a triple, single, two walks and an RBI at the plate Monday against Enterprise in a Region 7-2A matchup. Hughey also pitched a complete game win while striking out five and giving up just four hits. The Lady Hornets are now 2-0 in division play while Enterprise has a 1-1 region record.

Loyd Star beat Enterprise 8-3 Monday in their Region 7-2A softball matchup. That final score doesn’t tell the story of how close things were between the county rivals though.

Enterprise (3-5) jumped up 2-0 in the top of the first only to see the homestanding Lady Hornets (5-5) tie things up with a pair of runs in the bottom half of the inning.

The teams were tied 3-3 after five complete. The big inning that LS coach Scott Leggett had been looking for finally came in the bottom of the sixth.

Eighth-grader Ainsley Gennaro got on via a single with one out in the frame for Loyd Star. The Lady Hornets then loaded the bases as Macy East drew a walk and Aubrey Britt reached via a bunt.

A Carson Hughey single scored one run in the inning, a Bailey Zumbro fly-out added another and then an Alyssa Leggett double added two more runs.

The final score of the night for LS came later in the sixth when Abby Burnette singled in a run.

“We’d been making solid contact all night, but their defense — especially their leftfielder (Bailey Parks) — made some great plays to keep us in check,” said Leggett.

Both teams are young — neither starts a senior — but both have some experienced players who have been contributors since they were in junior high.

One of the Lady Jackets that fits that description is sophomore pitcher Hannah Jergins. A varsity member since seventh grade, Jergins is in her first year pitching for EAC.

Hadi says building confidence is key this season for his team.

“Every game is important for this group because we’ve got to build the belief we can win,” said Abdul-Hadi. “Winning our first region game against Bogue Chitto was big and tonight we battled every inning. Loyd Star just got the key hits when they needed them and that was the difference.”

Leggett is in his first year as head coach at Loyd Star after being an assistant the previous two seasons. He agrees that Enterprise is an improved team in Abdul-Hadi’s third season.

“My team was frustrated it took us so long to get going, but Enterprise had a lot to do with that,” said Leggett. “I know a lot of their kids and they’re only going to get better.”

Fittingly the final play of the game was a flyout to Loyd Star centerfielder Aubrey Britt. You’d have to live under a boulder at this point to not know about how well Britt runs.

The four-time defending MHSAA 2A cross-country champion, Britt covers the middle of the outfield on Jan Smith Delaughter Field like a tarp.

Britt had a couple of SportsCenter worthy catches including one over the shoulder grab that saw her reach the ball in a dead sprint.

Leggett wishes his field would have had an actual tarp on it earlier in the day when a line of showers moved through the area.

“The rain came in and we didn’t have the manpower to get the tarp out in time,” said Leggett. “That just meant we had a lot of work to do on the infield to get it ready, but it was important for us to play tonight with heavier rain coming later this week.”

Parks and Katelynn Malone had a double apiece for EAC. Malone, Jergins and Kailee Nuckles all drove in one run each for the Lady Jackets.

The left-handed Hughey picked up the pitching win for Loyd Star. A sophomore, she was a Daily Leader All-Area selection as an eighth grader. Monday, she struck out five, walked two and gave up just four hits.

Hughey also helped her own cause at the plate with a triple. Baylee Zumbro drove in three runs for LS. Marley Britt also had an RBI for the Lady Hornets.

Loyd Star will travel to Bogue Chitto — the program Leggett led to multiple state championships during his 14 years at the school — on Thursday, weather permitting. They’ll then host Warren Central on Delaughter Field Friday.

Enterprise is also back in Region 7-2A play Thursday as they travel to face Wesson. On Friday they’ll host Brookhaven High.